By default, Windows MultiPoint Server 2012 provides sessions with an experience similar to Windows 8.
However, it's not really Windows 8. This can be problematic with some programs that are only compatible with client versions of Windows (such as Windows 7 and 8).

To overcome this problem, Microsoft offers the "Virtual Desktops" feature that allows you to create virtual desktops running Windows 7 or 8.
Warning : you must have the Enterprise edition of Windows 7 or 8 which works with a Volume Licensing (VL) system. So, you will also need CAL licenses for each user who will use a virtual desktop-based station. 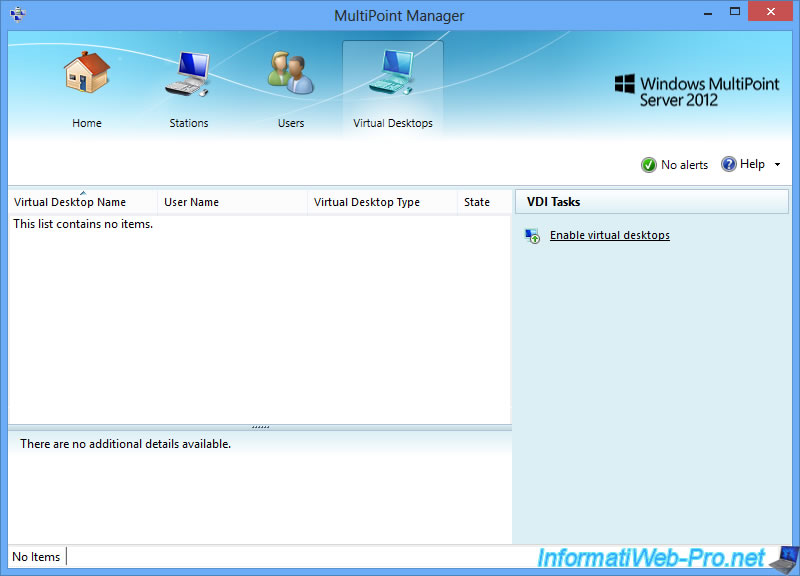 As indicated by MultiPoint Manager, it's best to enable this feature only if you need it. 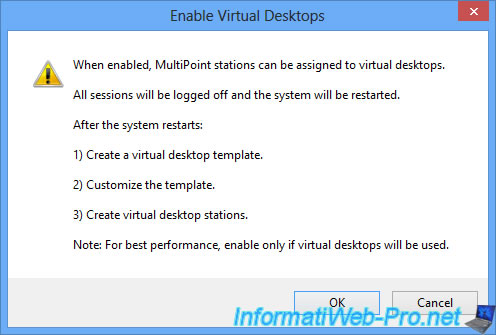 MultiPoint Manager simply indicates that it activates roles for virtual desktops.
But in reality, MultiPoint Manager installs the Hyper-V role of Windows Server in a completely transparent way for you.
Hyper-V being Microsoft's virtualization server. 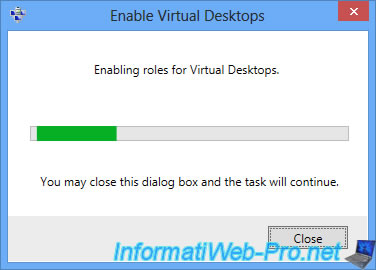 However, if you try to enable this Virtual Desktops feature in a virtual machine (either through VMware Workstation or any other similar virtualization solution), you will receive the following error message :
A prerequisite check for the Hyper-V feature failed.

The only theoretical solution (which is not really possible) is the activation of the nested virtualization (as explained by Microsoft and VMware).
Nevertheless, even on a powerful PC (with 32 GB of RAM, an Intel Core i5 and a real RAID 5), the activation of this possibility will not allow you to test the virtual desktops, because the host computer, as well as the virtual machine where Windows MultiPoint Server is installed will end up freezer.

If Windows MultiPoint Server 2012 is installed on a real PC or a real server, Windows will reboot to continue the configuration of features installed in the background. 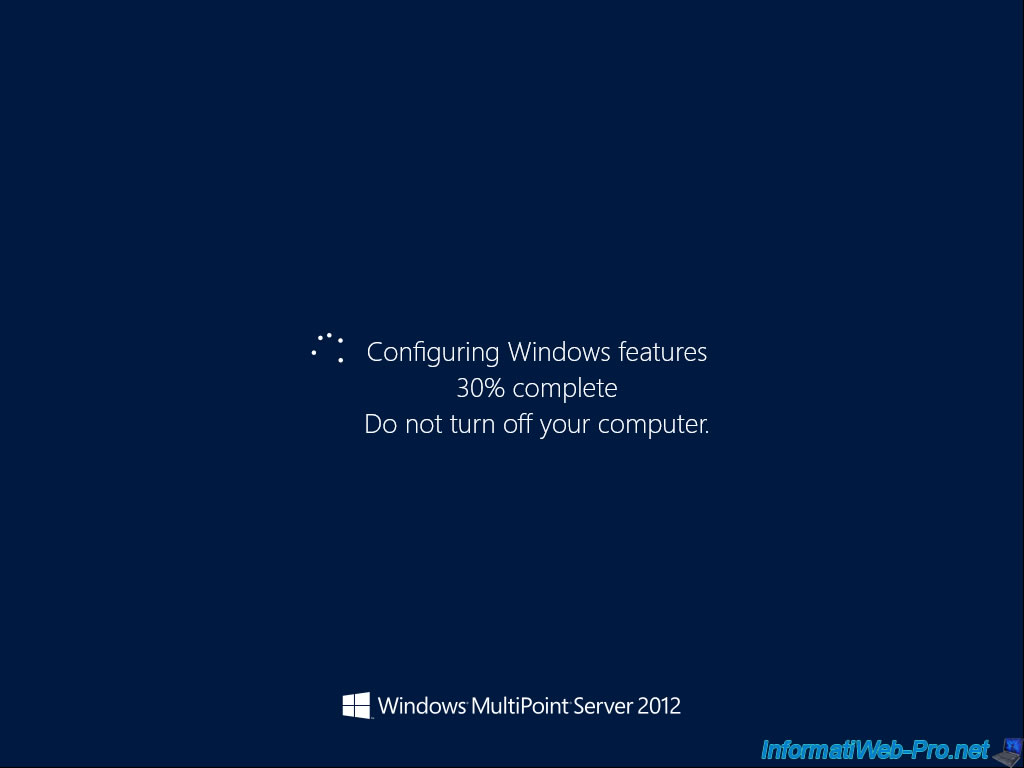 The computer will restart several times.

And you will see that Hyper-V has actually been installed by the MultiPoint Manager.

When the installation and configuration are complete, log back in as Administrator. 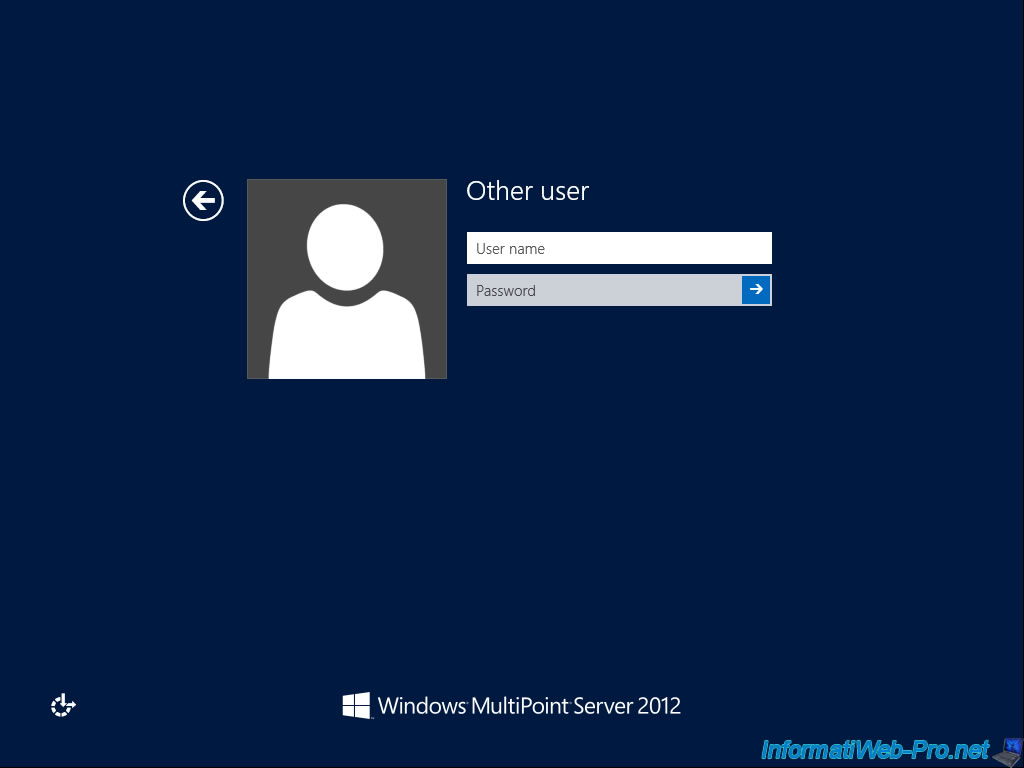 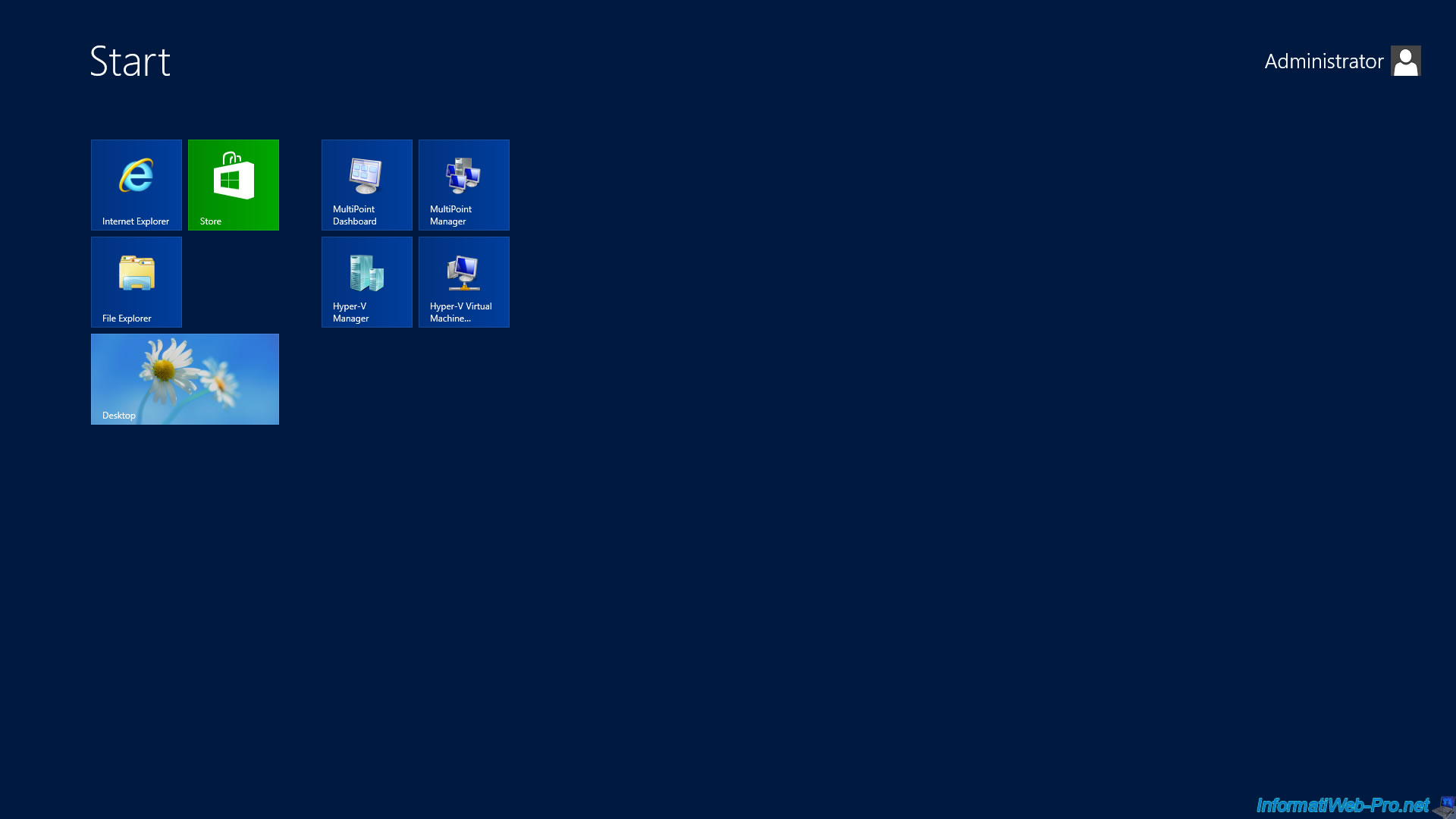 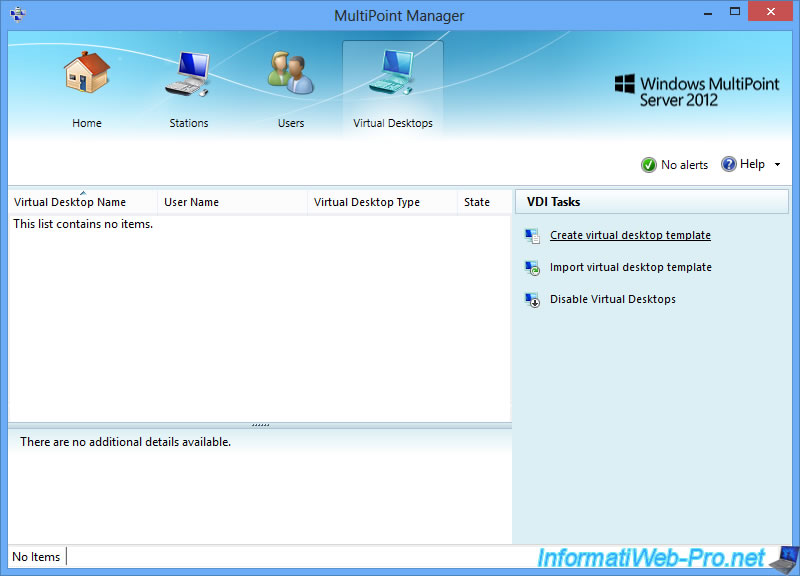 Note: if the Windows 7 or 8 Enterprise DVD is already in your server's CD/DVD drive, the MultiPoint Manager will automatically detect the install.wim file. Ex : d:\sources\install.wim

In our case, we will use the iso file from Windows 8 Enterprise.
To do this, click on : Browse. 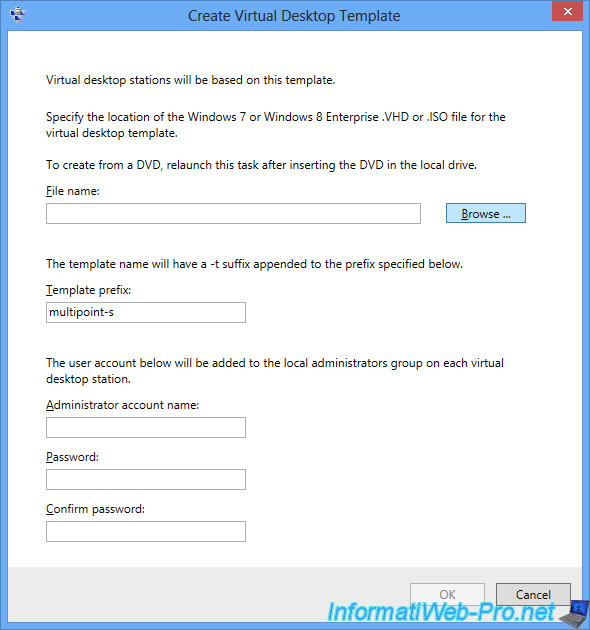 If you want to use an iso file of Windows 8 Enterprise or 7 Enterprise (not provided), you will first need to select "ISO files (*.iso)" in the list at the bottom right.
Then, the iso file will appear and you can select it.

Now, the path of the iso file is displayed.
Specify a prefix for the names of the future virtual desktops and configure the Administrator account that will be created in the virtual desktops. 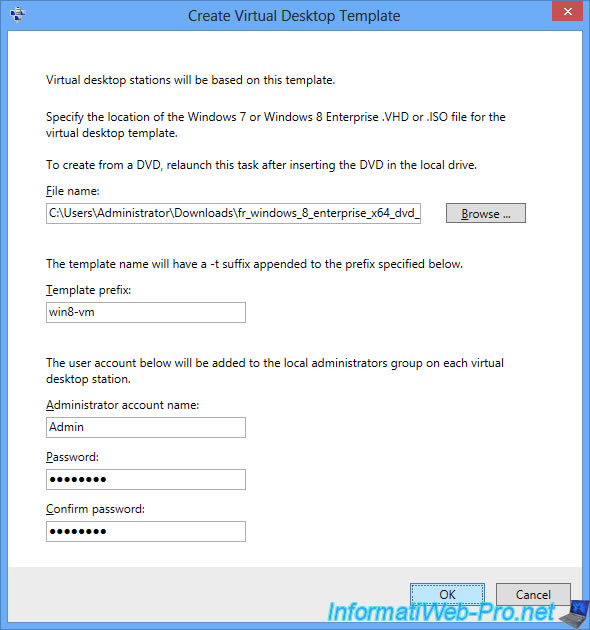 Wait while creating the virtual desktops. 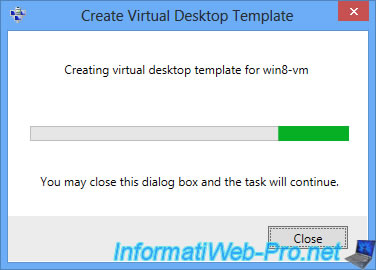 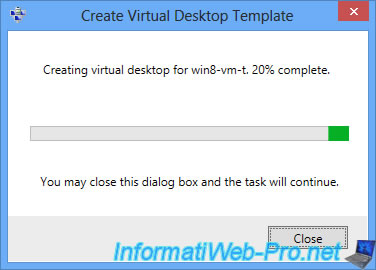 During the creation of the Template, you will see that a (virtual) DVD drive, as well as a partition will have appeared. 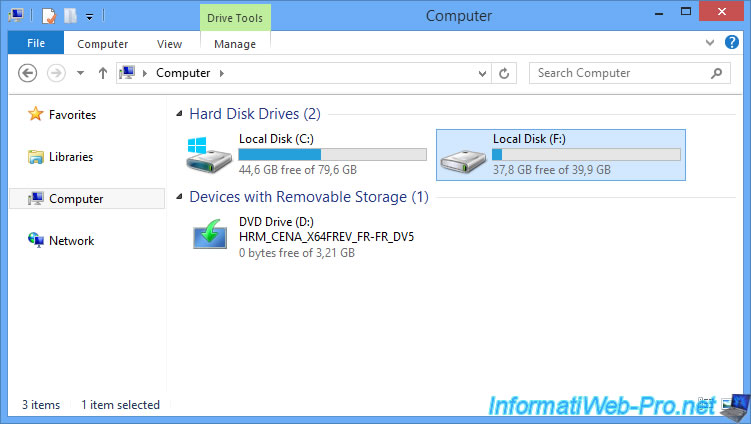 This is because Windows has mounted the iso file previously selected in a virtual DVD drive.

For the additional partition, this is a mount of the virtual hard disk also made by Windows.

Moreover, if you consult the hardware of your computer, you will see that you also have these 2 devices : 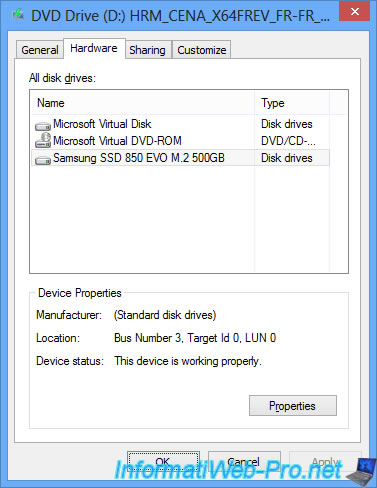 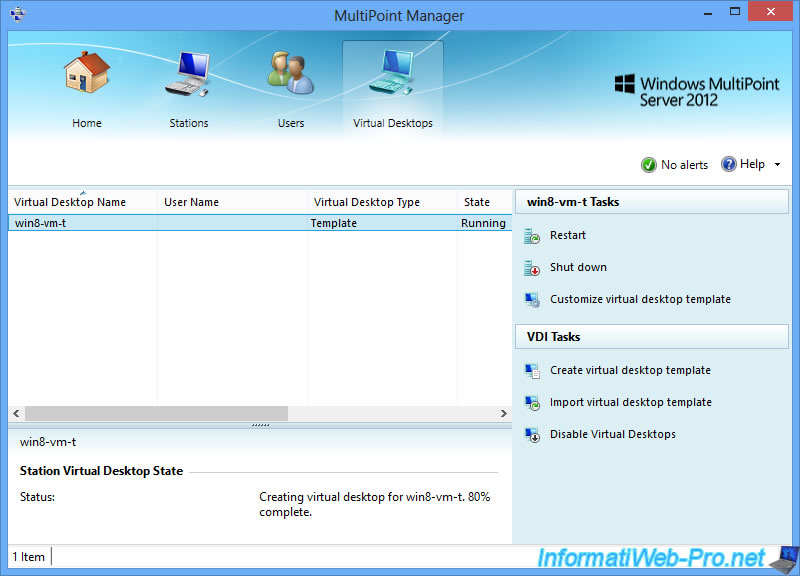 Once the template is created, the "Task completed successfully" message will be displayed. 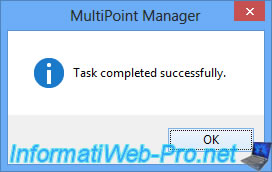