If you want to perform more complex tests in a virtual machine, be aware that you can also create a hierarchy of snapshots.
To do this, click on : Actions. 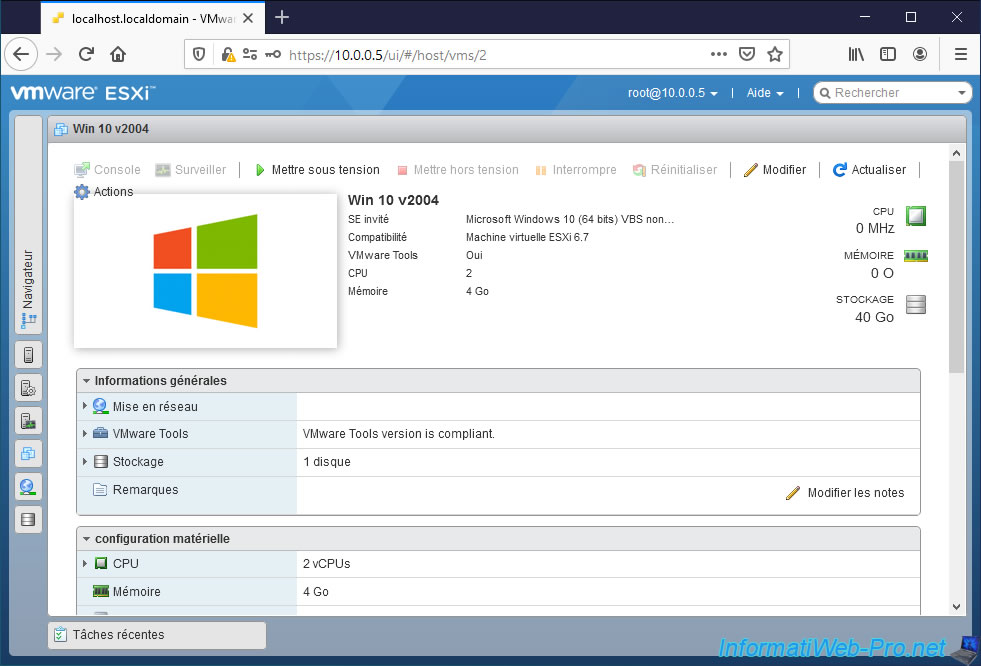 Then, on : Snapshots -> Manage snapshots. 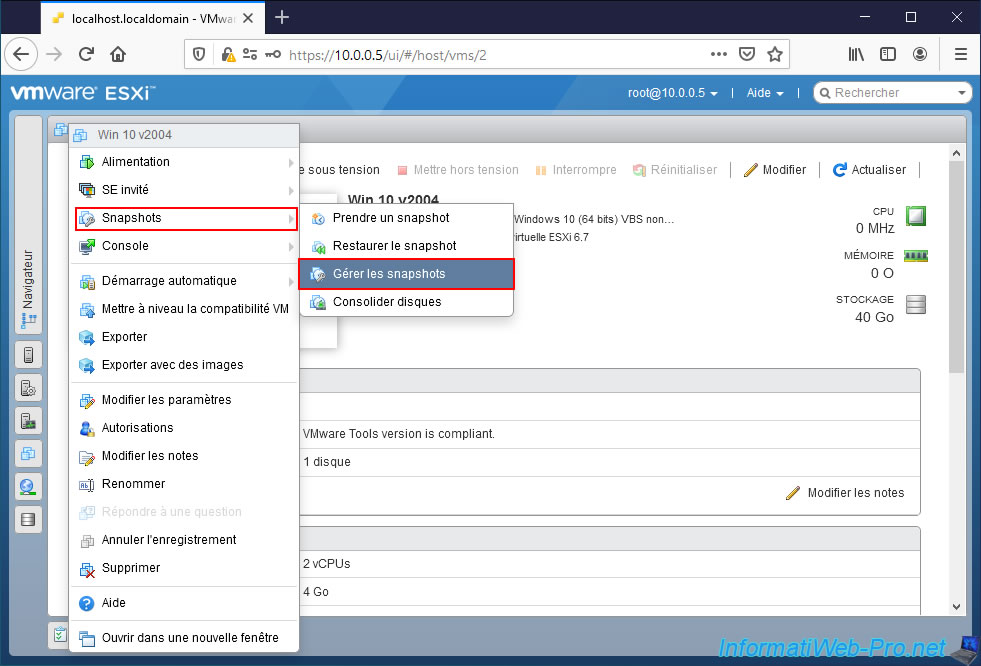 In this "Manage snapshots" window that appears, you will find :

To explain snapshot management in more detail, we will take an example where you test several versions of a program, but keeping each version to be able to choose the one you prefer.

Thanks to the snapshots created, we can therefore restore our virtual machine to the state in which it was :

Although the 2015 version works, we still want to test a different version of Visual Studio.
So, we select the "clean install" snapshot and click on "Restore snapshot".

We confirm the restoration of this snapshot.
Note that VMware ESXi tells you that the current state of the virtual machine (therefore, the "you are here" line) will be lost.
However, no snapshot will be deleted.

As you can see, our previous "Visual Studio 2015 Install" snapshot has been kept as expected.

We start our virtual machine, then we install the 2017 version of Visual Studio, and we create a new snapshot after it's installed. 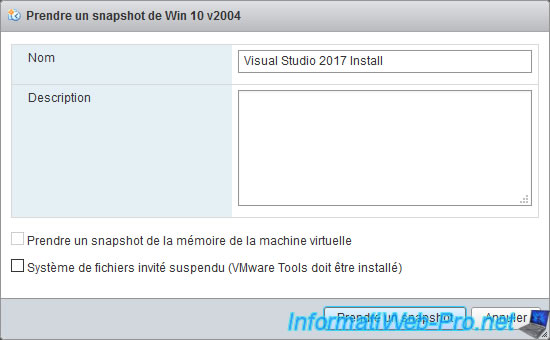 For the moment, VMware only takes into account our "clean install" and "Visual Studio 2017 Install" snapshots when we start our virtual machine.

We are still not satisfied, so we restore the "clean install" snapshot again.

We confirm the restoration of the snapshot.

And we end up again under the "clean install" snapshot.
If we start our virtual machine, we will only see a clean install of Windows. The 2 installations of Visual Studio will not be visible from the guest operating system.

We install the 2019 version of Visual Studio and create a new snapshot. 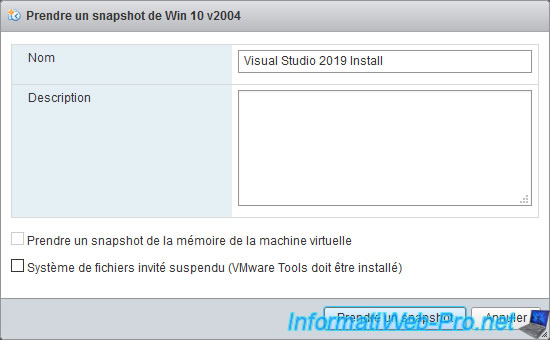 This time, VMware ESXi will use our "clean install" and "Visual Studio 2019 Install" snapshots.

Note that each time you create a snapshot, ".vmdk", "-xxxxxx.vmdk" and ".vmsn" files are created and each time contain the changes made to the virtual machine since the previous snapshot (or its baseline state, if applicable).
It's for this reason that creating a high number of snapshots dependent on each other (as is the case in this example) is not a good idea in the long term, as it reduces the performance of your virtual machine.
However, it's still useful for short duration tests. 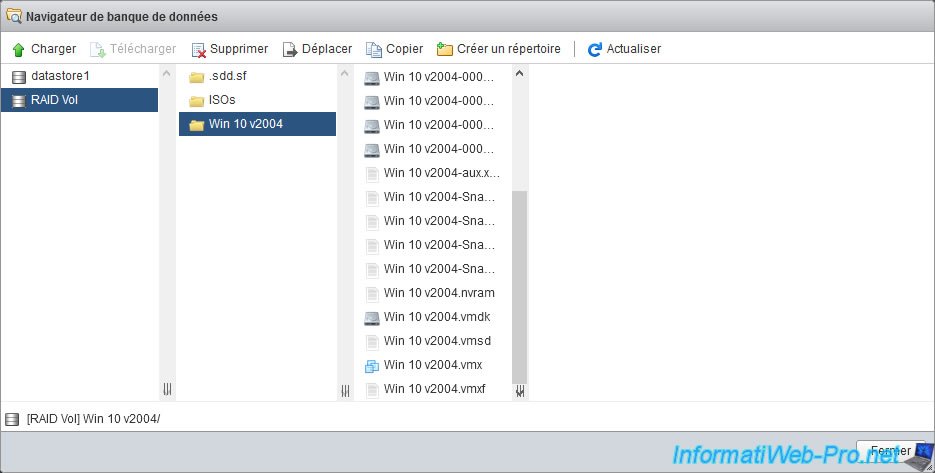 In short, after having tested different versions of Visual Studio, we decided to keep the 2017 version (for example).
To do this, we select our "Visual Studio 2017 Install" snapshot and click on "Restore snapshot".

We confirm the restoration of the snapshot.

Now VMware ESXi will use our "clean install" and "Visual Studio 2017 Install" snapshots.
The 2019 version will therefore have disappeared and the 2017 version will have reappeared in the virtual machine.

Now that we are sure we want to use the 2017 version, we can delete the other snapshots (which are not currently in use) to reclaim storage space on our VMware ESXi hypervisor.
To do this, we select our "Visual Studio 2015 Install" snapshot and click on "Delete snapshot".

We confirm the deletion of this snapshot.
By default, only this snapshot will be deleted, but if there were also child snapshots, you could also delete them by checking the "Remove all children snapshots" box.

Same for the snapshot for the 2019 version.

We also confirm its deletion.

No data will therefore be deleted, as VMware ESXi will simply merge the necessary files.

We confirm the deletion of this snapshot.
Warning : don't check the box below.

Now, we have only one snapshot left, but as expected, Visual Studio 2017 is still present in the virtual machine.

As you can see, almost all of the extra ".vmdk" and ".vmsn" files (created when creating the different snapshots) are gone. 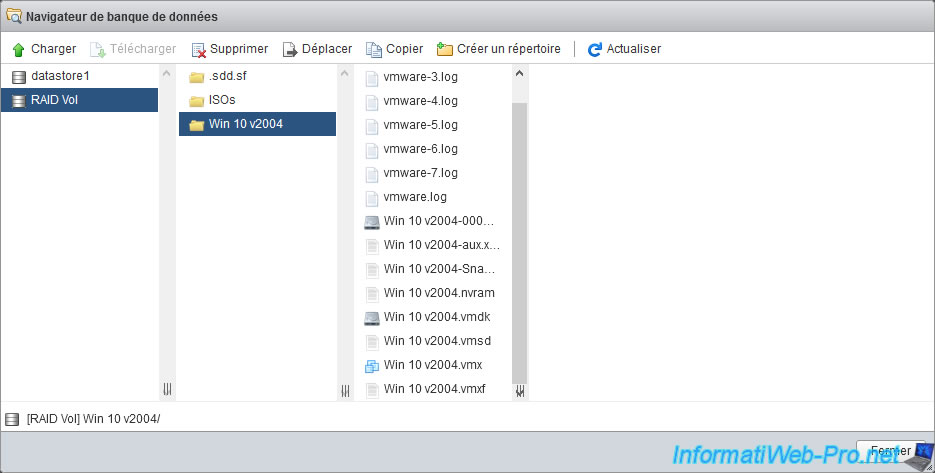 To do this, click on : Actions -> Snapshots -> Consolidate disks. 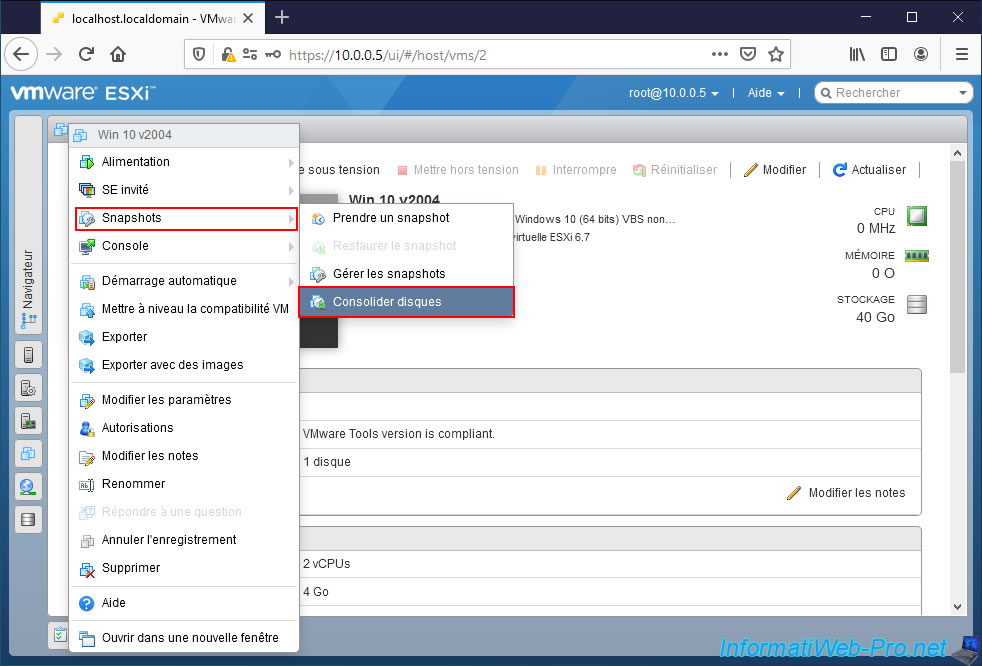 When the process is complete, the message "Disk consolidation for VM [VM Name] has completed" will appear. 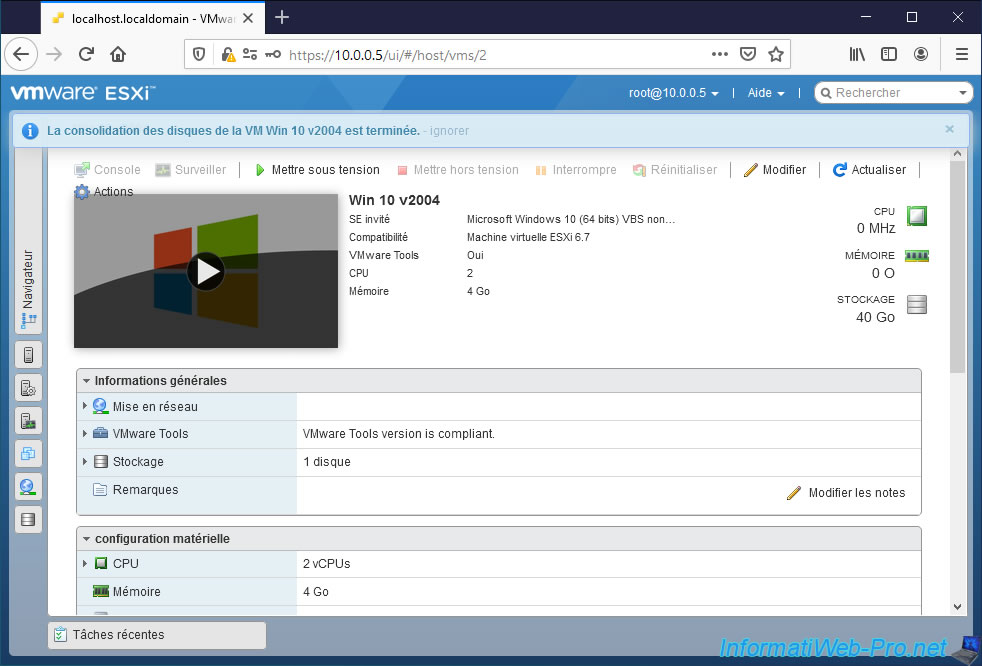 6. Can't extend a virtual hard disk after creating a snapshot

While using snapshots can be very interesting in many cases, it also comes with some limitations.
And in particular, the inability to extend (enlarge) the size of a virtual hard disk for a virtual machine where you would have created at least one snapshot. 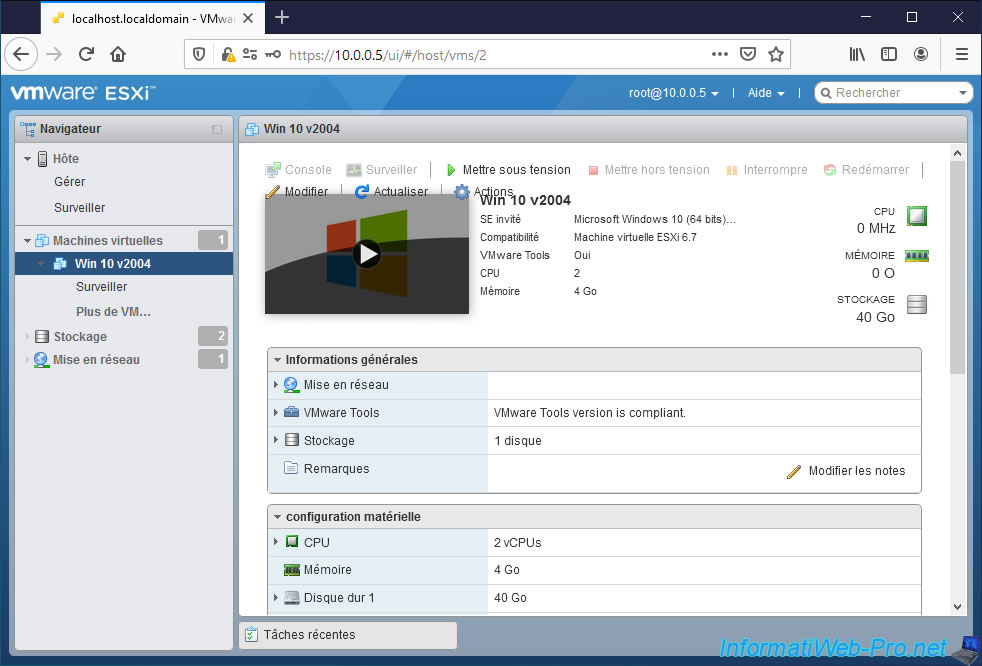 Then, try to increase the size of a virtual hard disk. 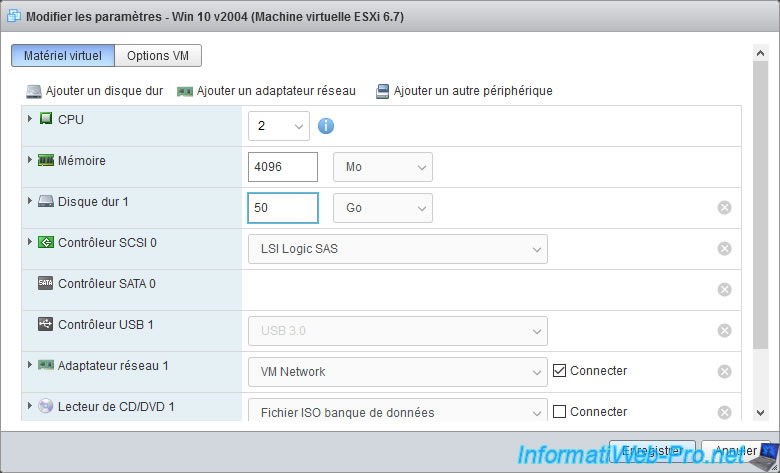 An error message appears in red : 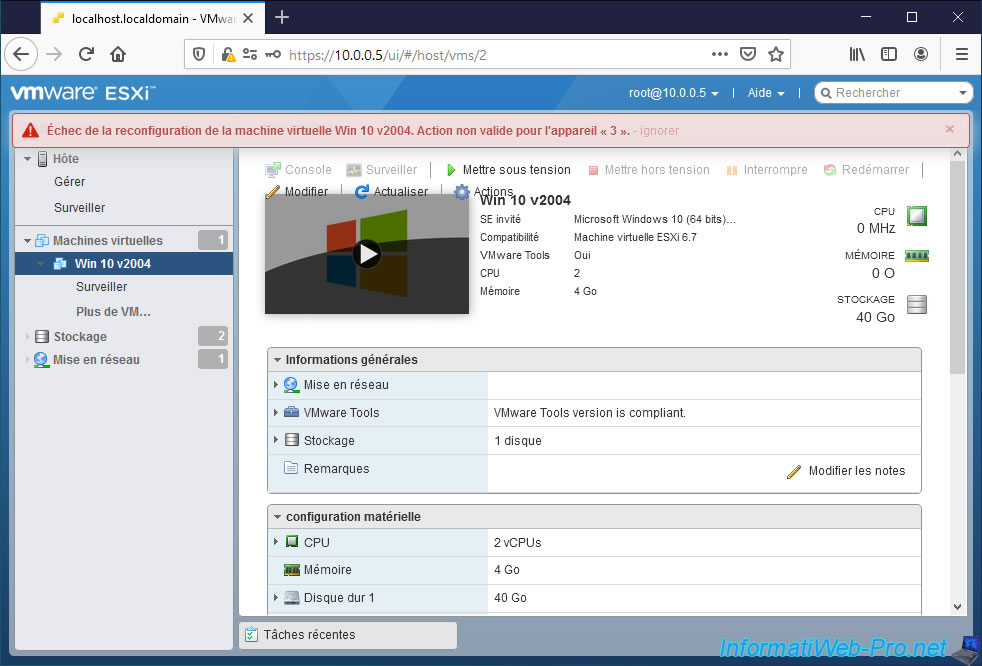 To see it more easily, you will need to use the VMRC software.
Once this software is installed, click on : Actions -> Console -> Launch remote console. 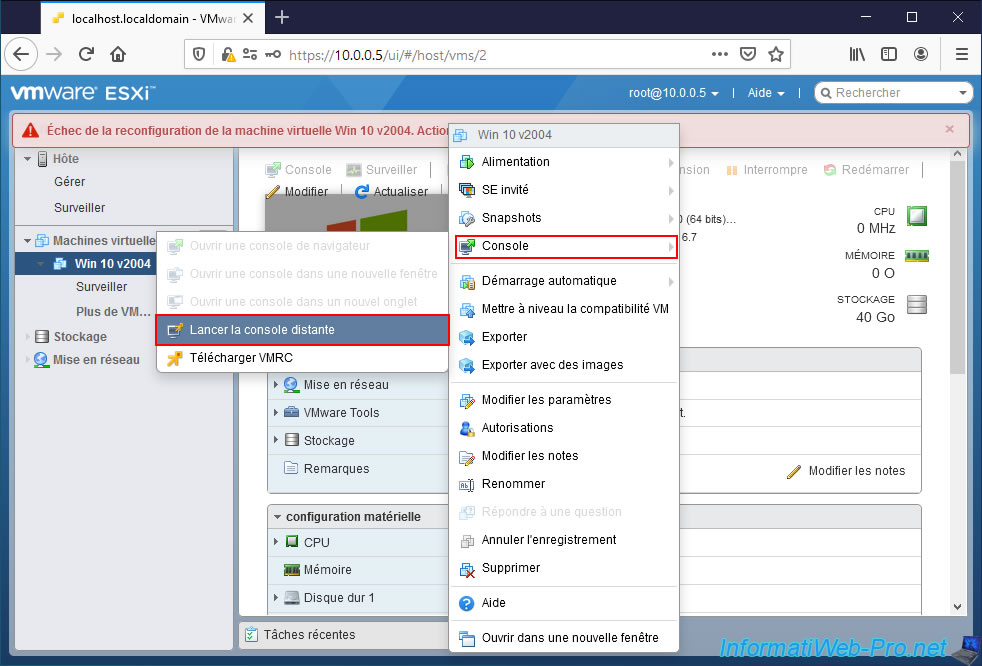 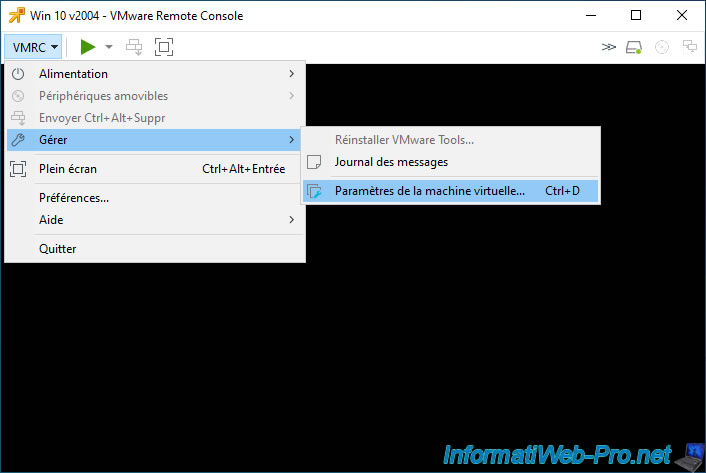 As you can see, VMware Remote Console (VMRC) tells you that virtual machine disks that have snapshots can't be extended.
Unless you delete the snapshots or use VMware vCenter Converter. 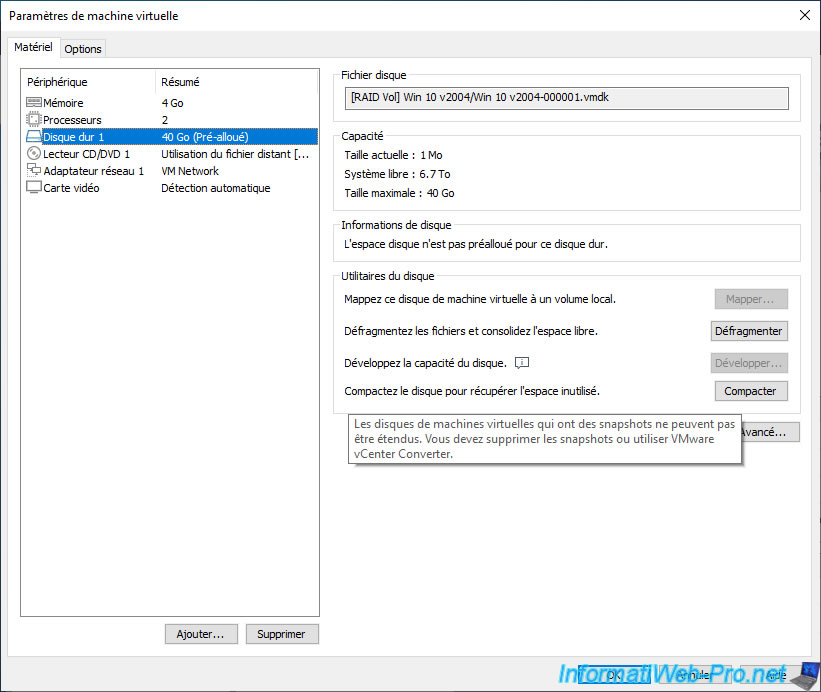