1. Benefits of the maxCache feature

With Microsemi Adaptec's maxCache feature found on the SmartRAID 3100 Series and 3162 Series controllers, you can experience better performance up to 8 times faster than with hard drives alone.

2. What models of SSDs can I use for maxCache ?

It's also possible that you will find the "Adaptec maxCache™ SSD Cache Performance Kit" PDF where you will see that the supplied SSD is a SSD Extreme SATA Intel® X-25E (on which Adaptec has pasted its logo) and which is existed in 32 GB and 64 GB. 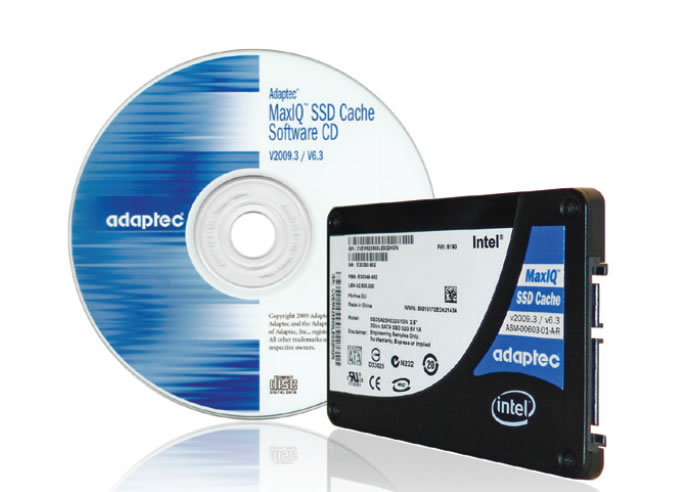 In short, today, there is no longer an official solution from Microsemi / Adaptec, but there is a compatibility list allowing you to know the list of SSDs that have been tested with your Microsemi Adaptec SmartRAID controller model for this maxCache feature.
That said, you can also try to use another SSD model that is not listed if you already have one, since this list is obviously not complete.
This compatibility page is therefore there in case you want to make sure that maxCache will be able to work correctly with this or that model of SSD.

3. Adding SSDs to use maxCache

The maxCache feature also requires the creation of arrays (maxCache Arrays) and logical drives (maxCache Logical Devices) as is the case for RAID volumes.
You will therefore also find the different current RAID levels, including RAID 5 that we will use in this tutorial.

In our case, we used 3 "Samsung 870 EVO 250 GB" SATA SSDs which are not referenced in the compatibility lists, but which also worked without problem. 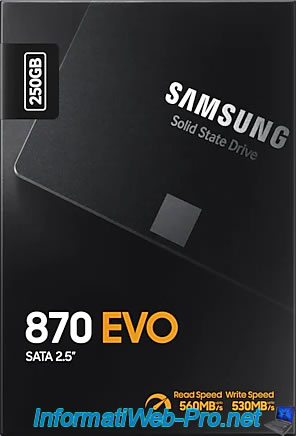 To connect them to our Microsemi Adaptec SmartRAID controller, we also bought an "Adaptec ACK-I-HDmSAS-4SATA-SB-.8M" cable which has : 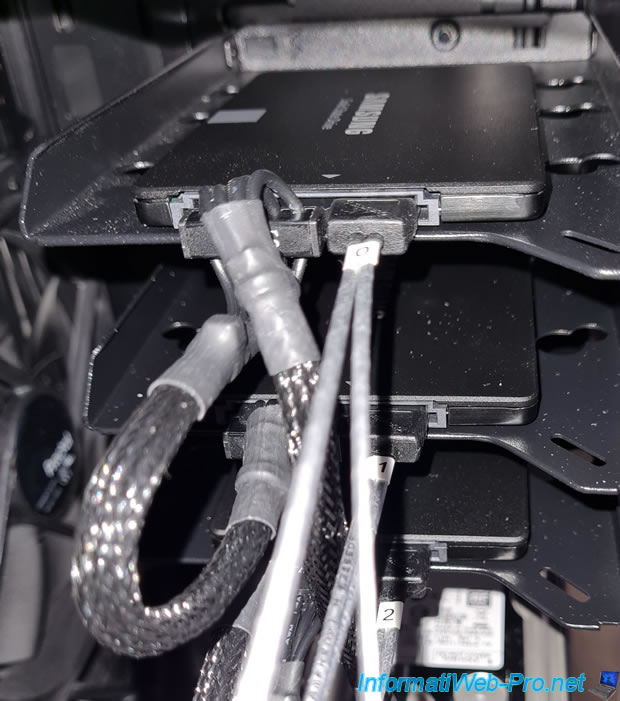 In the maxView web interface, select your controller and you will see that there are : 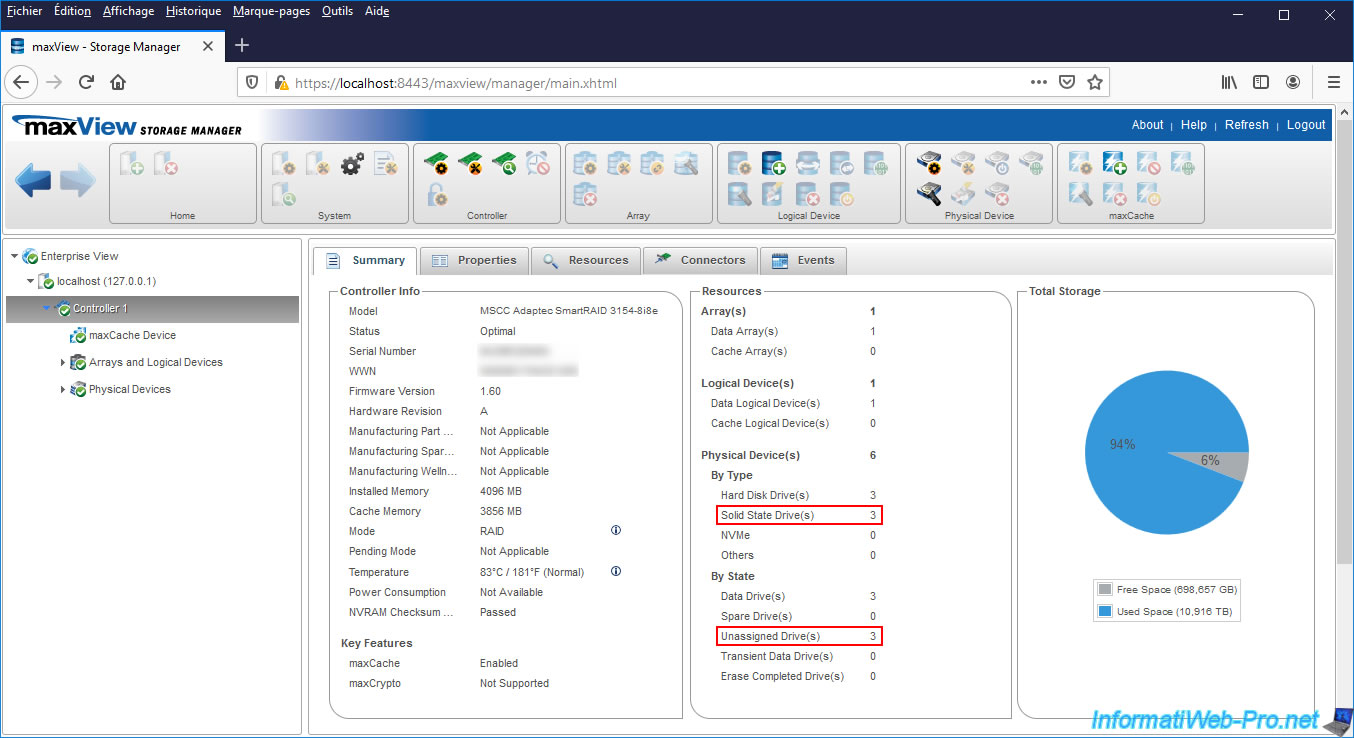 If you go to "Physical Devices", you will see your 3 SSDs appear with the "Ready" status (because we have not used them yet). 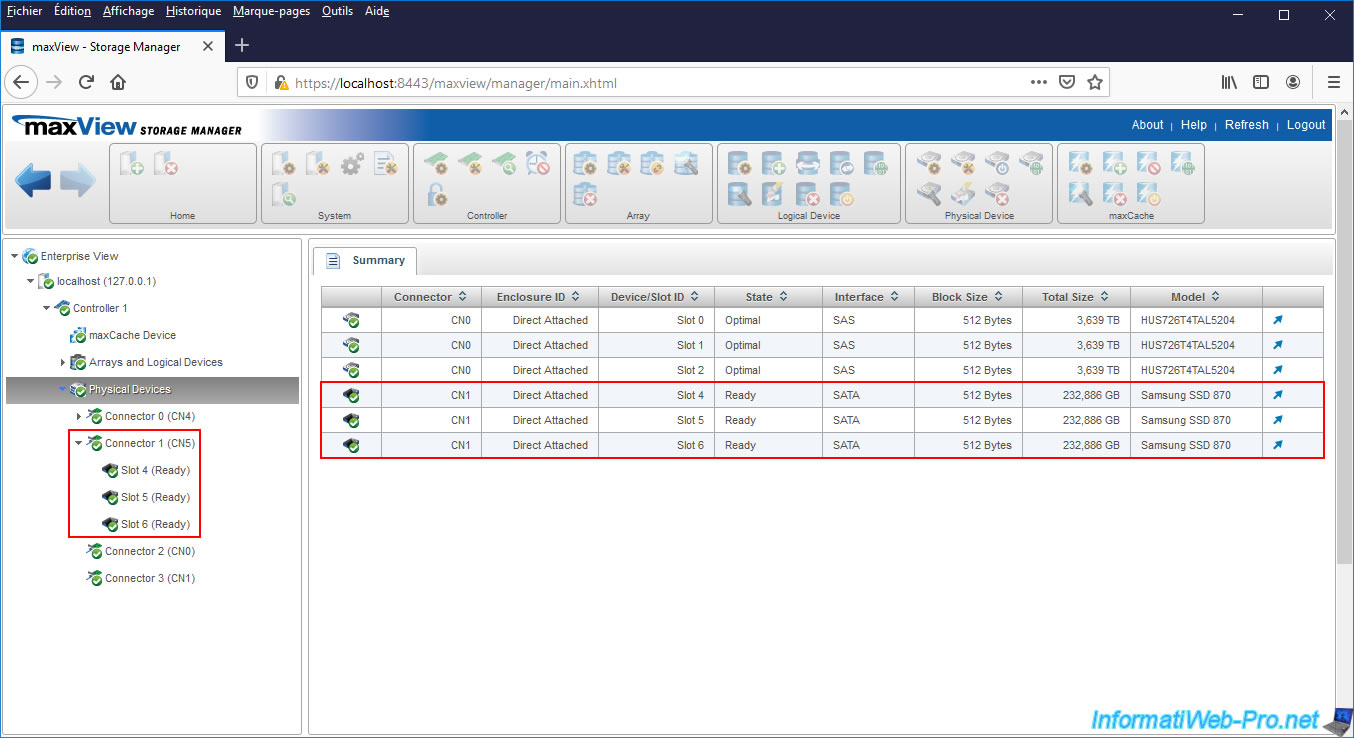 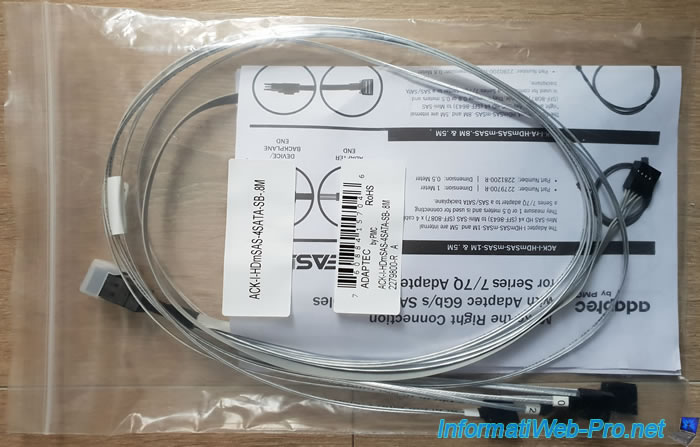 This is what this cable looks like when unboxed. 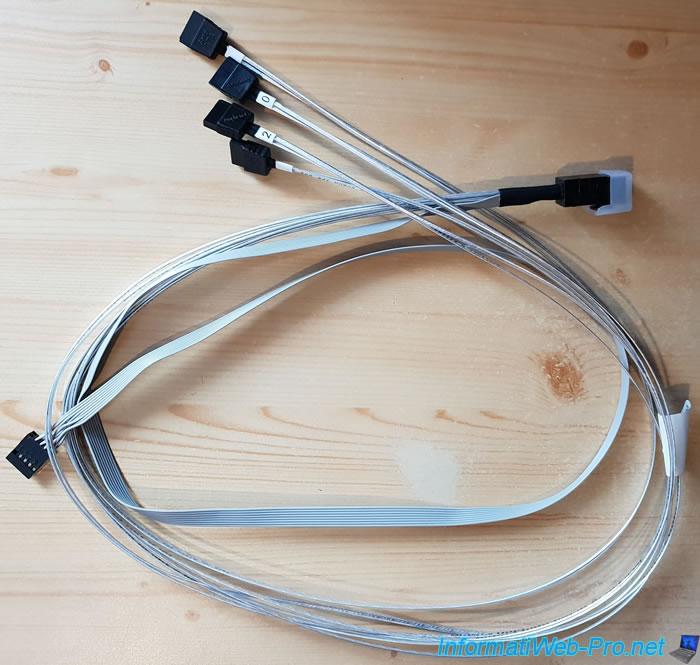 On one side, you will find 4 SATA connectors for data transfer to plug into your SSDs. 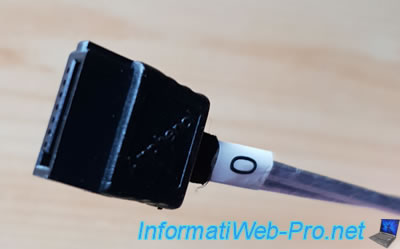 And on the other side, you will find the Mini SAS HD connector to plug into your Microsemi Adaptec SmartRAID controller.

Finally, you will also find a sideband cable to transmit the "SGPIO" and "SES-2 over I2C" signals to the backplane.
But, you will only need it if you have a real server.

To create an array and a logical drive to use as a cache via maxCache, you must select your controller (on the left), then click on the + icon in the "maxCache" block located at the top right. 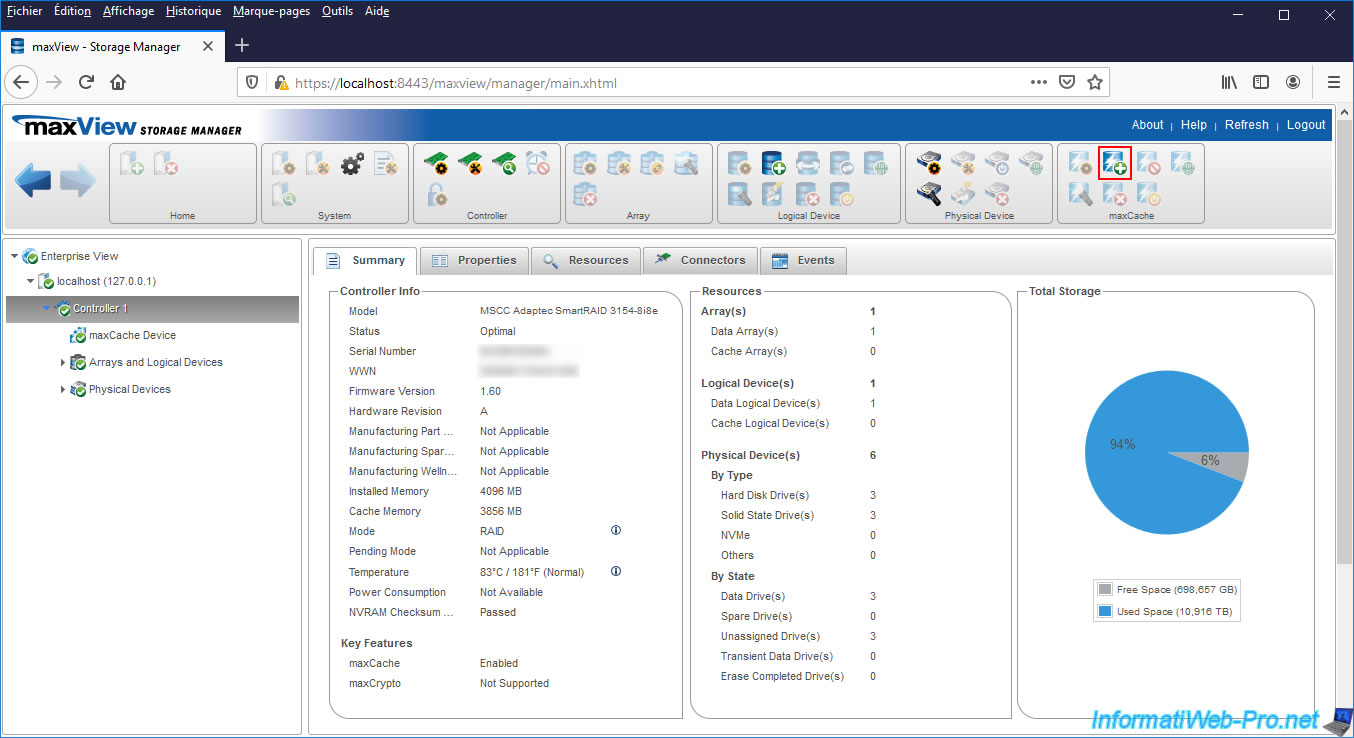 Note that if you have just started your computer / server, this option may not be available temporarily.
If so, select your controller and go to the "Properties" tab.
In the 1st column, you will see that the battery is currently charging. 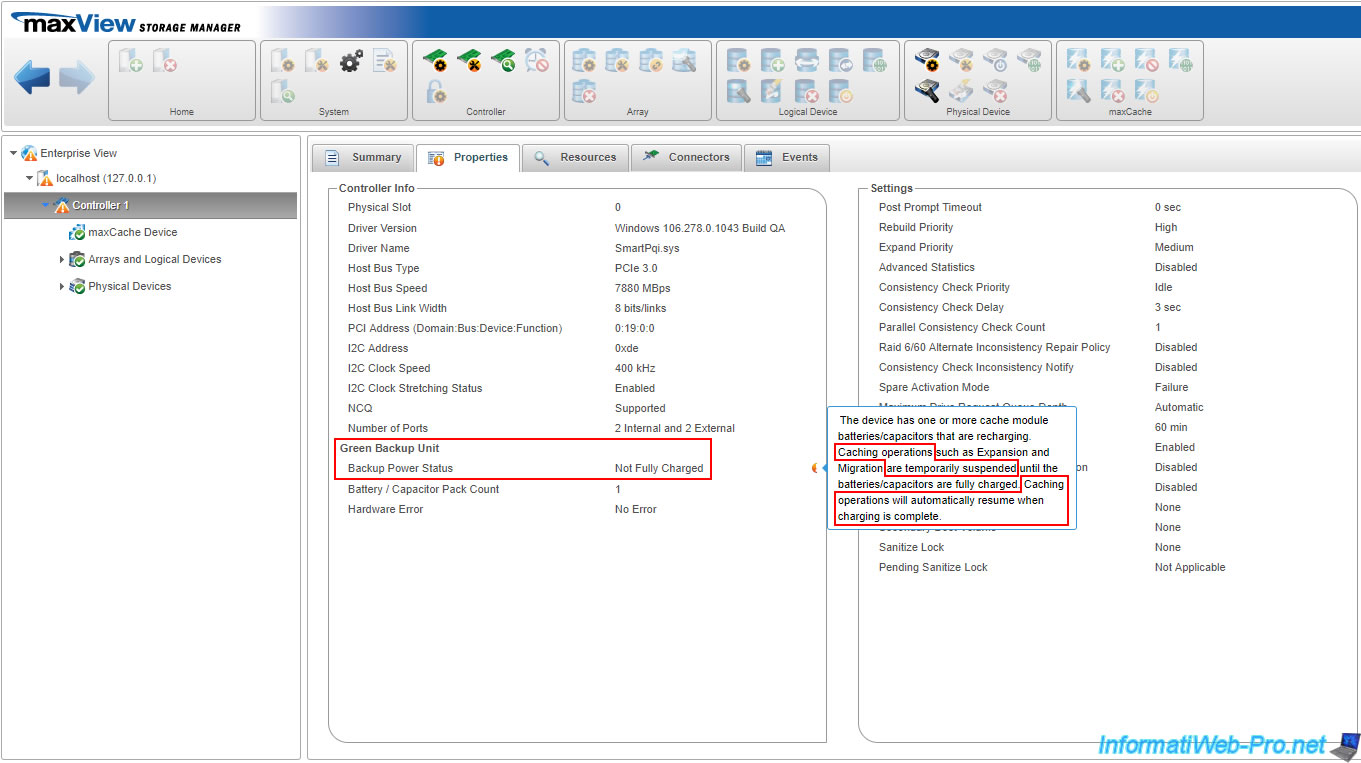 In the "Create maxCache Device" window that appears, select the desired RAID level for the cache system : 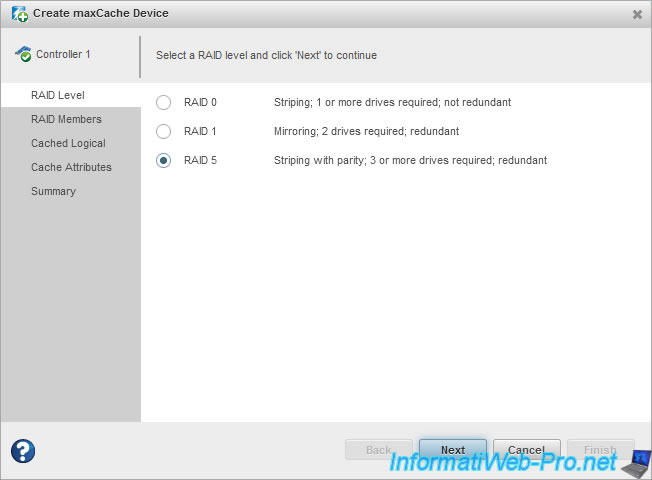 In the next step (RAID Members), select the Device Type : SSD SATA ... (the numerical value corresponds to the size of the blocks used on these SSDs).
In our case, our 3 new SSDs appear, so we check the "Select All" box at the top of the table. 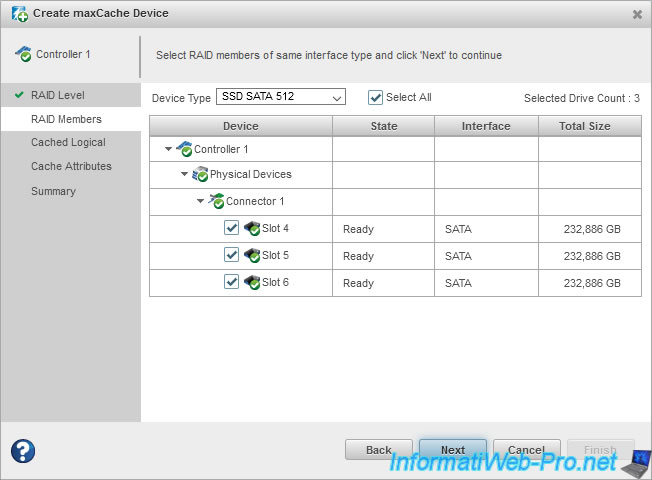 Then, select for which RAID logical drive(s) you want to use this SSD cache drive.
In our case, our "Virtualization" RAID array. 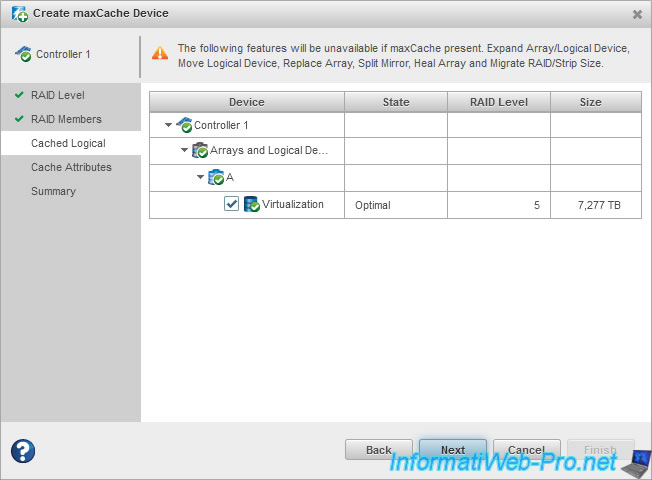 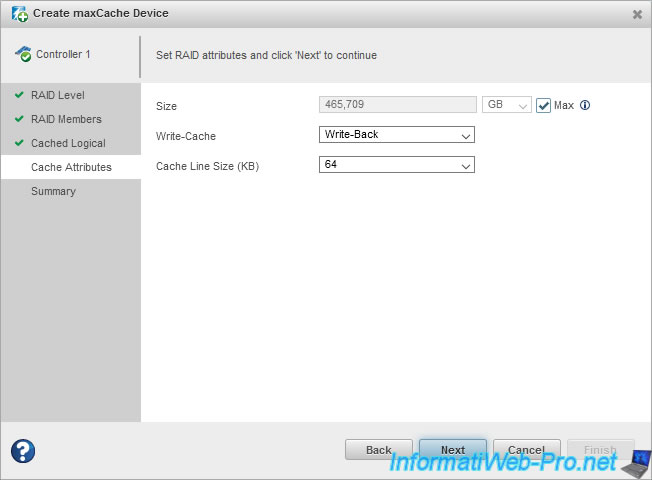 Warning : as indicated above, using this maxCache feature on a RAID logical drive will disable these features on it : 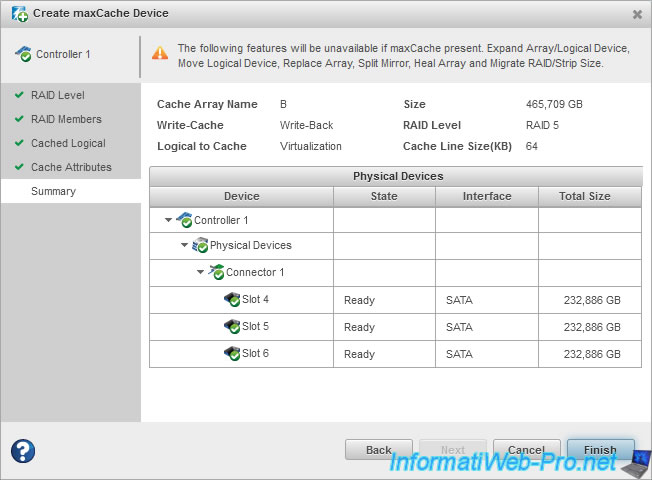 After a few seconds, the "Create maxCache device operation successful" message will appear. 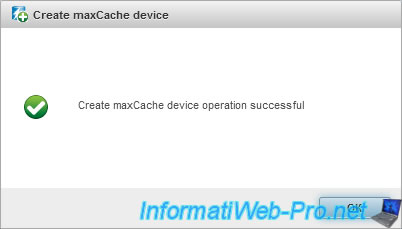