By selecting your controller in the left column, you will see that there are currently : 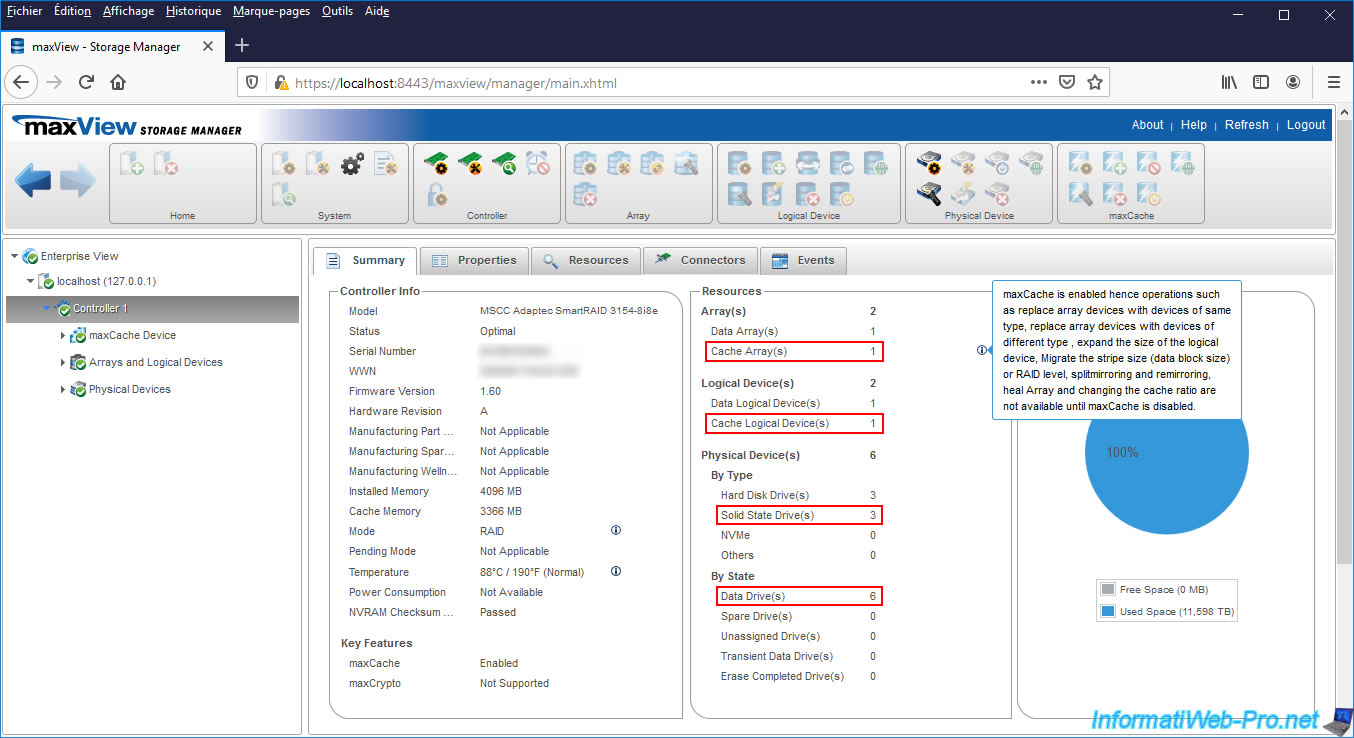 If you go to "maxCache Device", you will find an array (in our case : "B") with these informations : 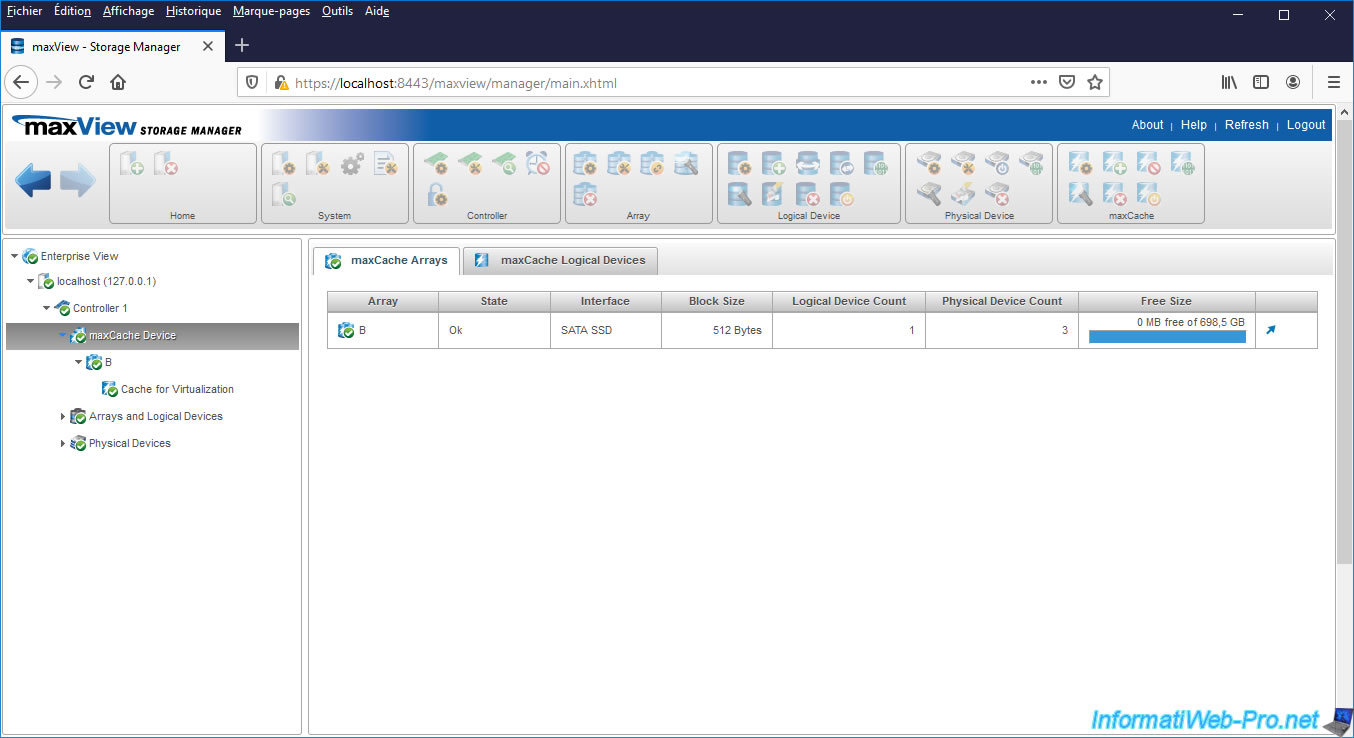 If you select the logical drive used as cache, you will be able to see : 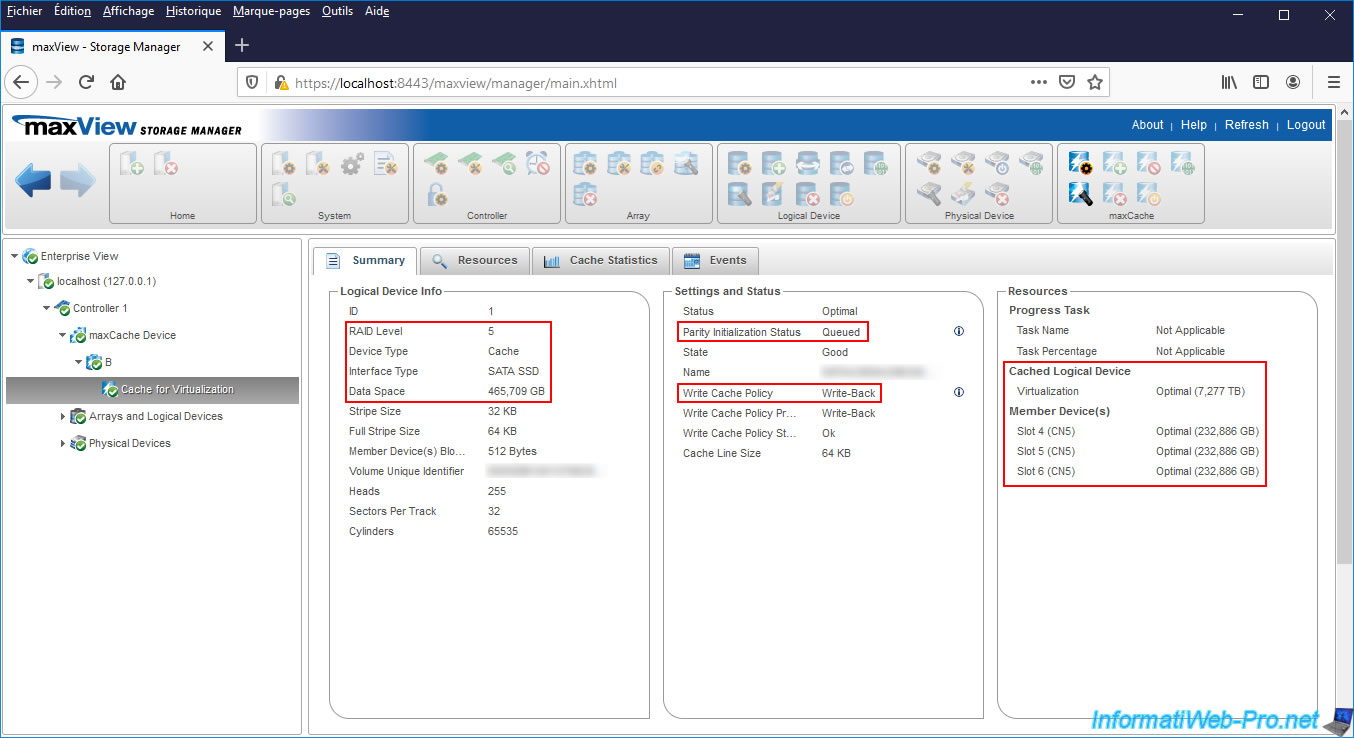 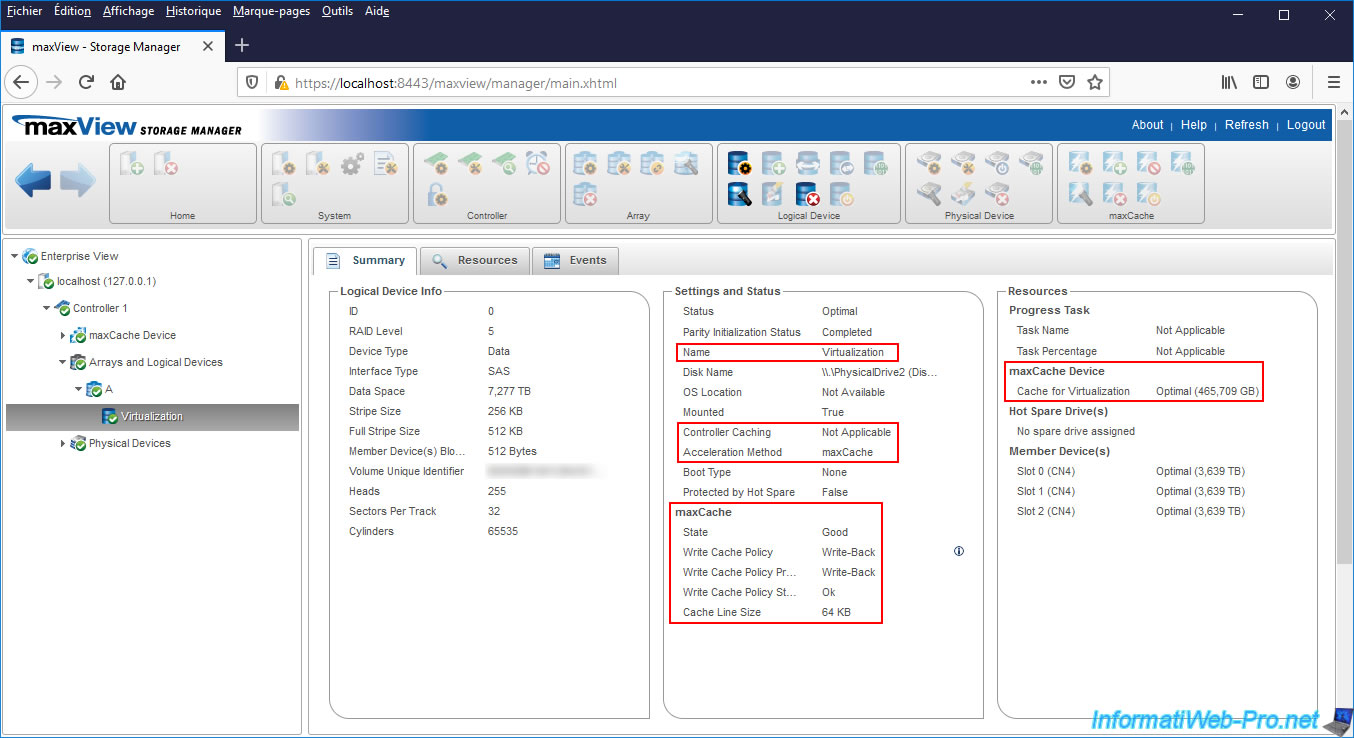 If you select one of the SSDs used by maxCache, you will see that : 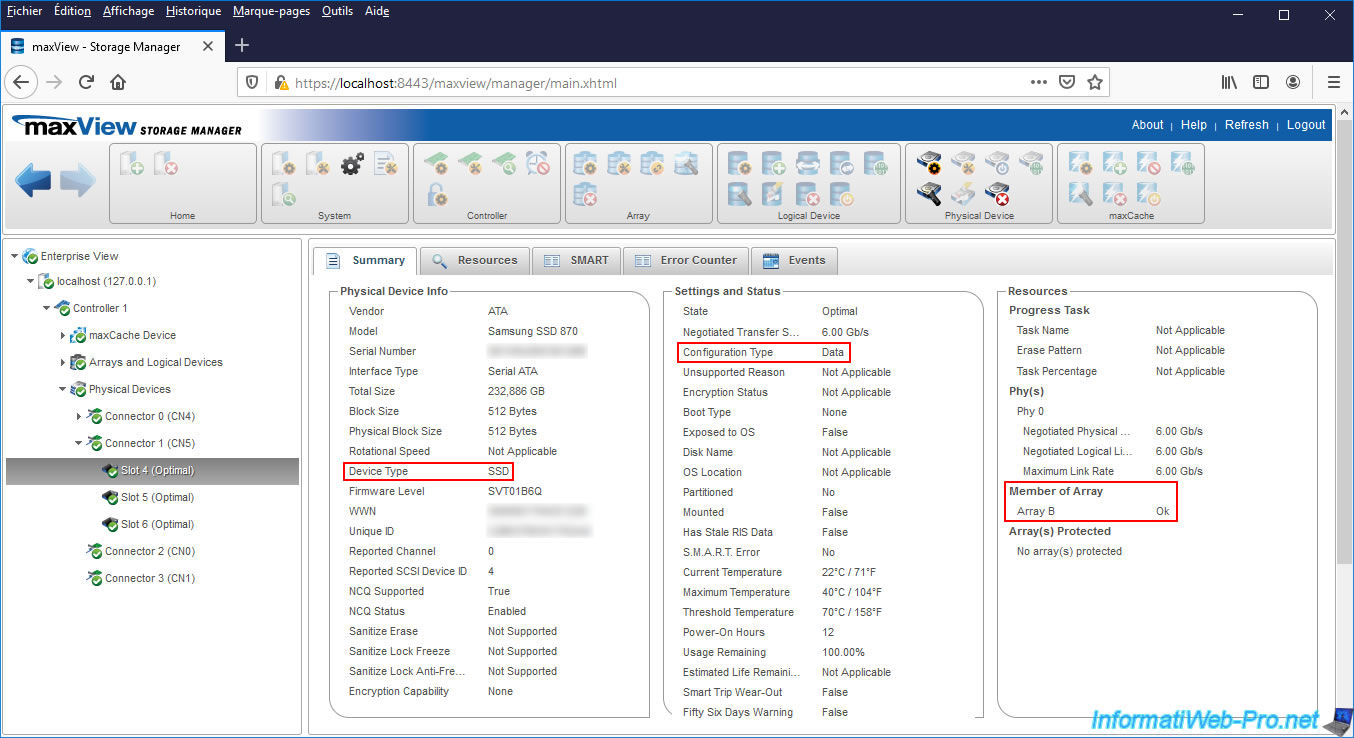 To easily see that this physical disk is used via maxCache, you have to go to the "Resources" tab of it.
In this tab, you will see the "Member of maxCache Array and maxCache Device(s)" table appear. 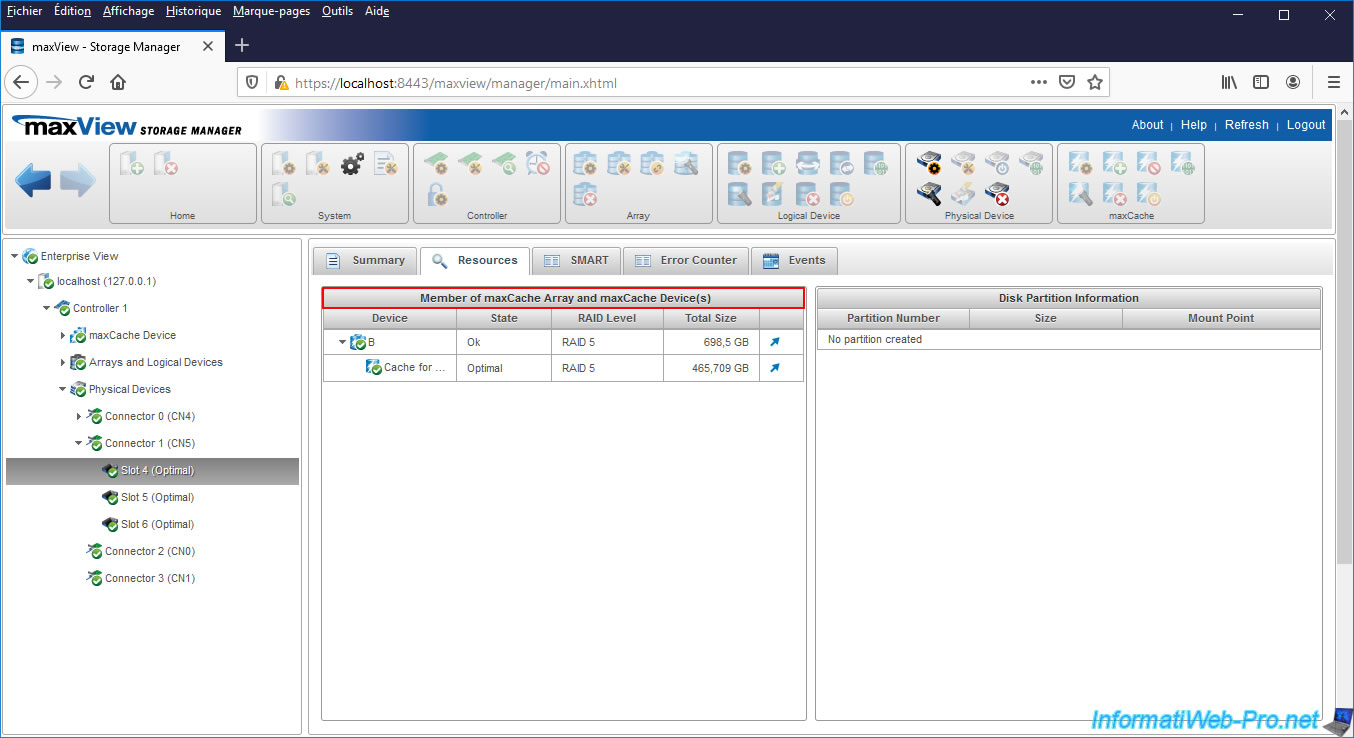 The other possibility is obviously to look for the name of the array (in this case "B" in our case) and to see that it's a device of type (Device Type) "Cache". 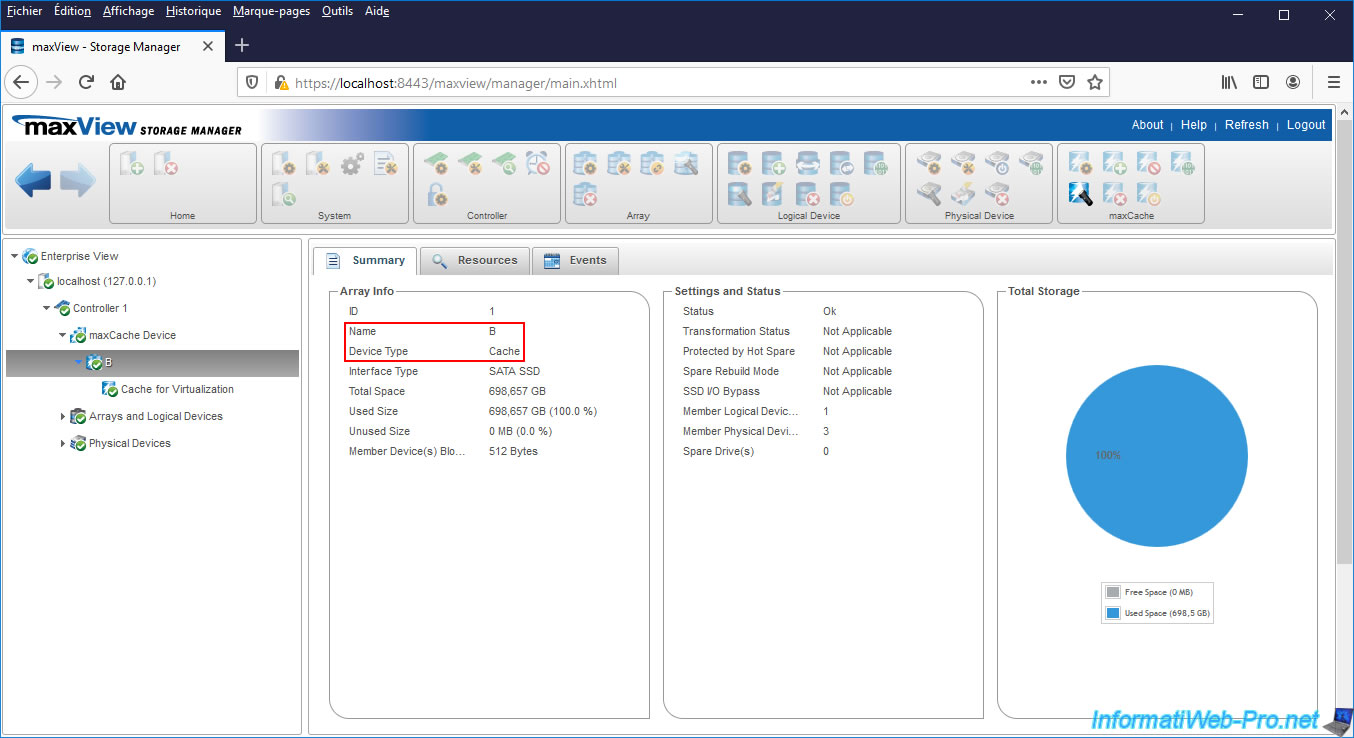 If you go to the RAID logical drive events (which uses your maxCache logical drive), you will see these appear : 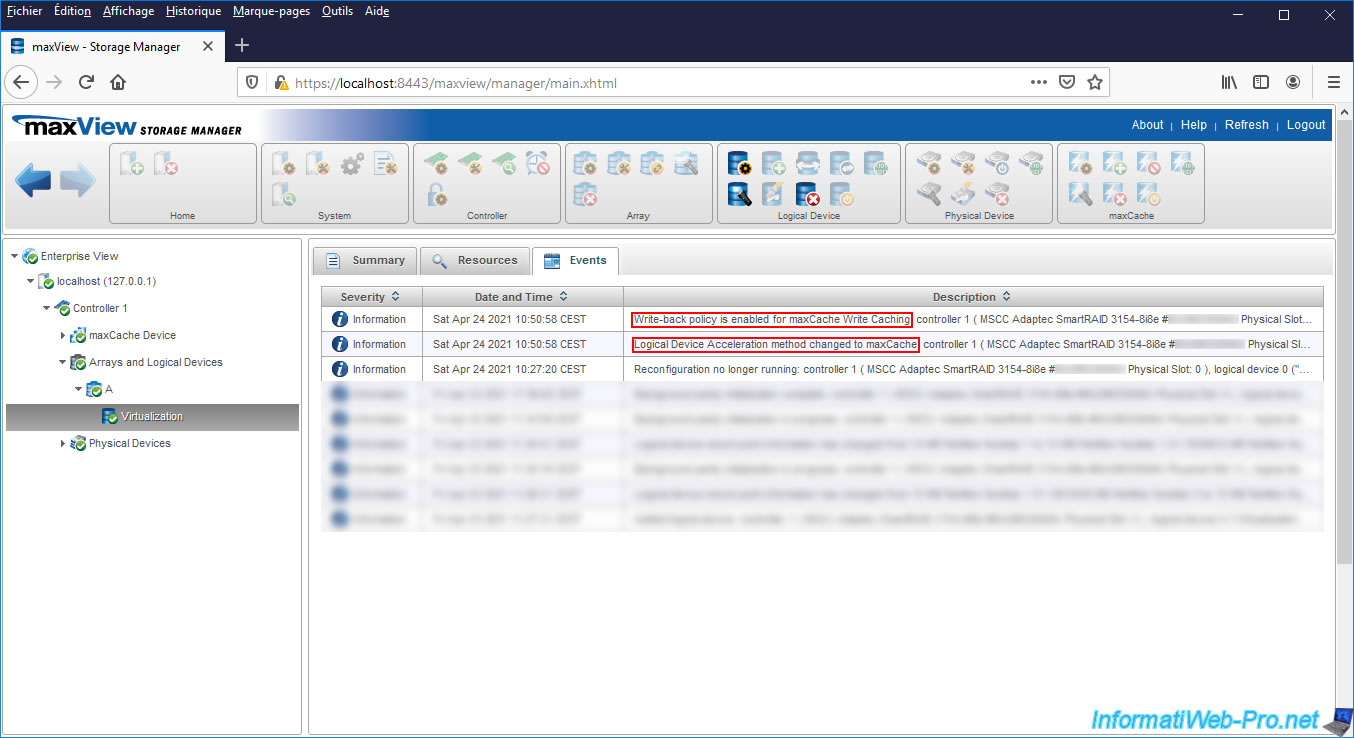 If you are using your RAID logical drive only for storage, the "Queued" status may appear for your logical cache drive (maxCache).
If this is not your case, the initialization is probably already in progress. In this case, go to the next step of the tutorial. 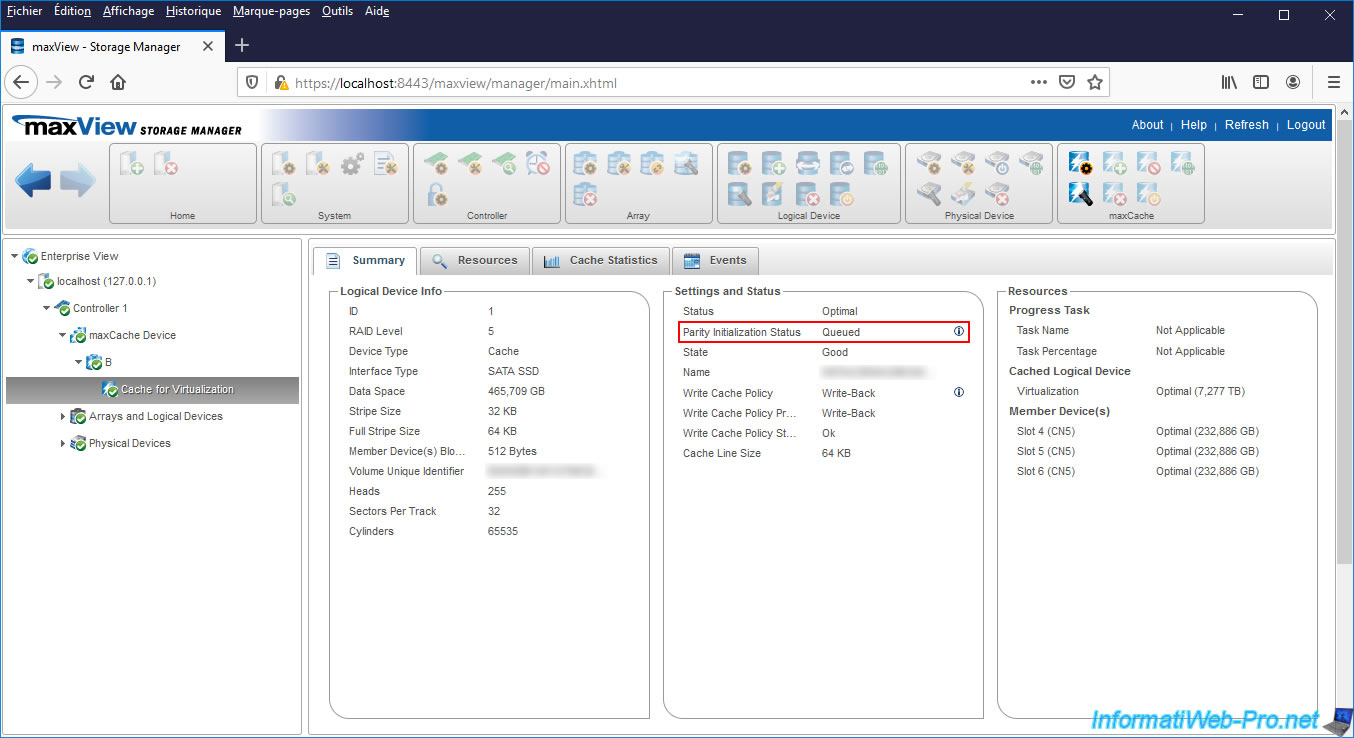 In our case, we therefore created a simple file with the notepad.

Then, refresh the maxView page and you will see that the parity initialization will start (Parity Initialization Status : In Progress). 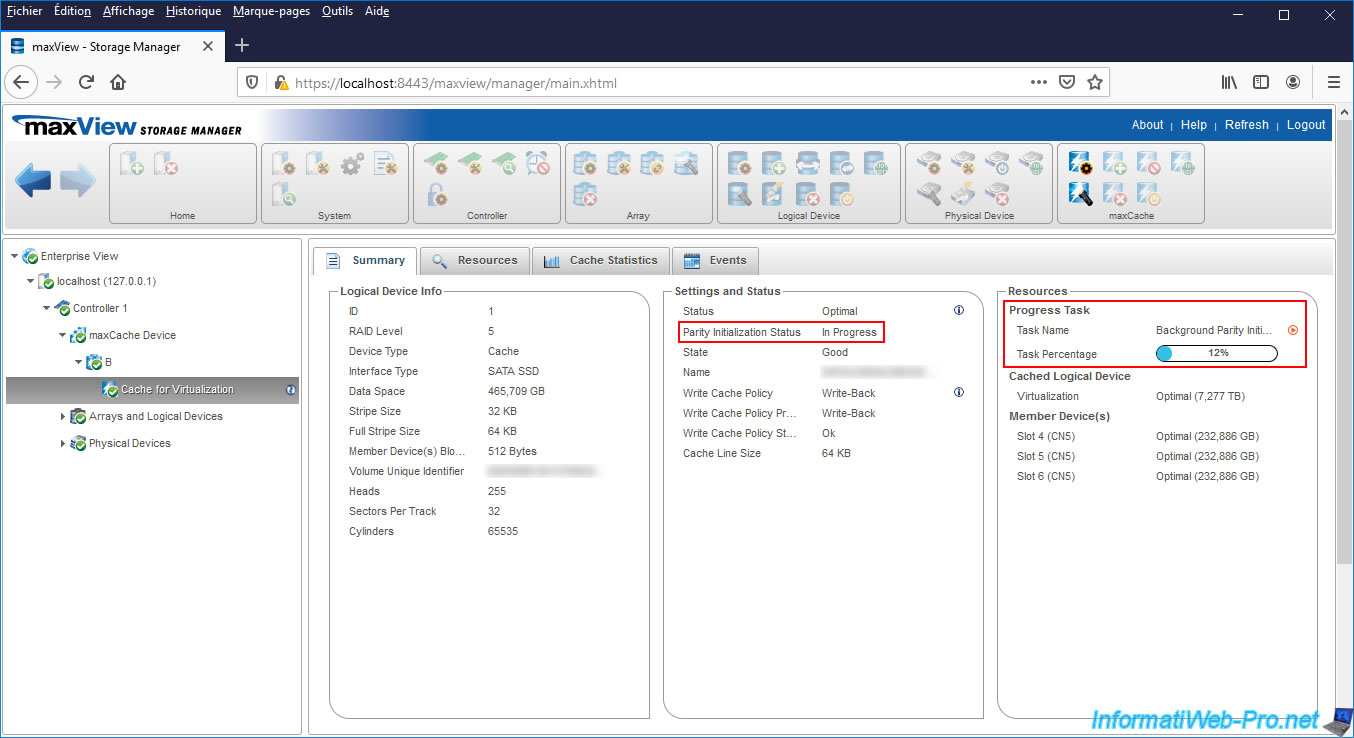 Once parity initialization is complete, the status will be : Completed.
Now, you can enjoy the best possible performance with this logical cache drive (maxCache). 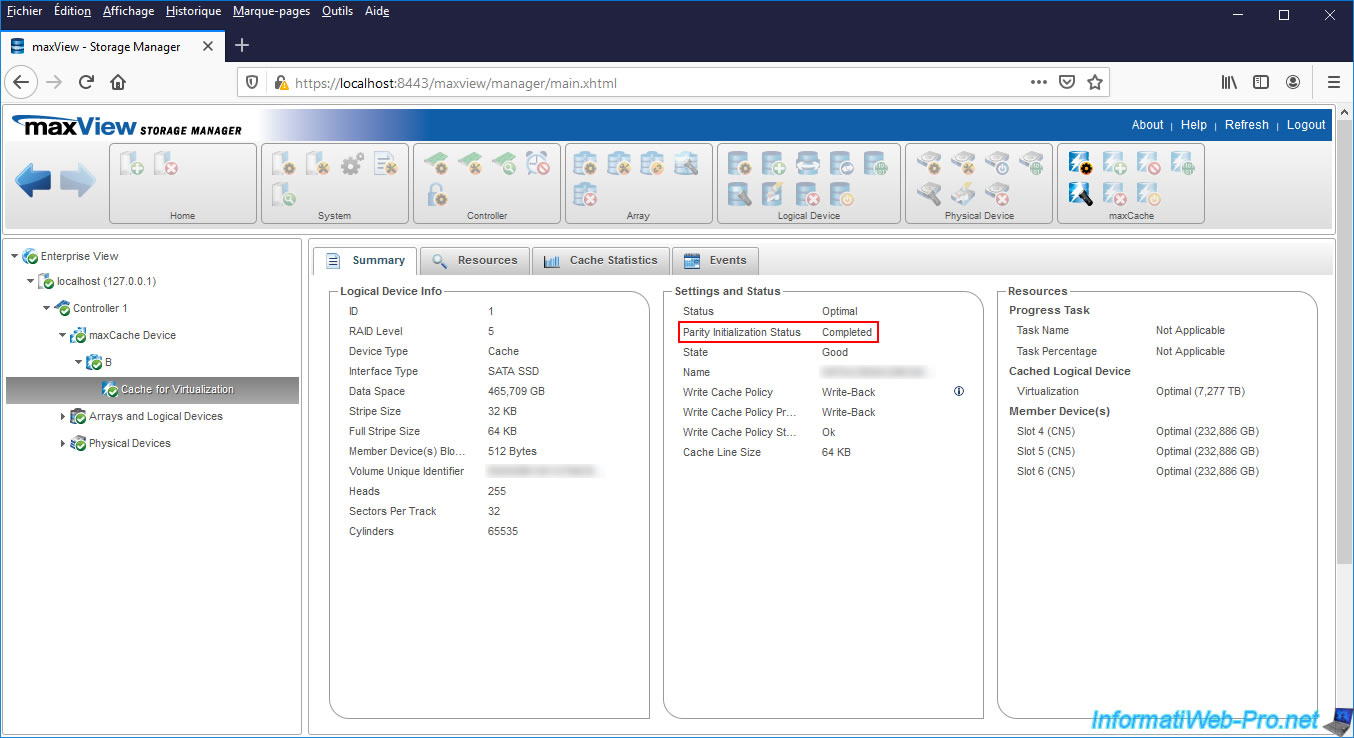 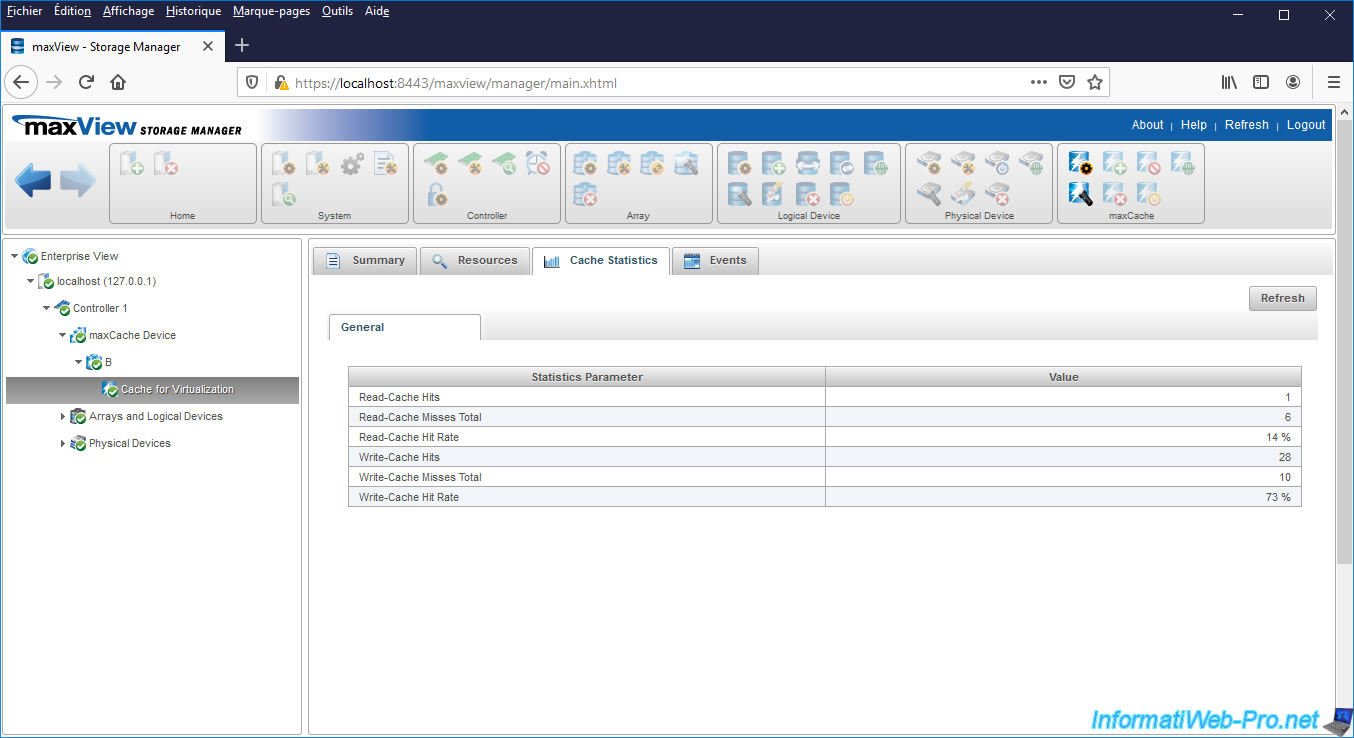 To delete a logical cache disk (maxCache), the write policy used must be "Write-Through".
Otherwise, by hovering over the "i" icon next to "Write Cache Policy - Write Back", maxView will tell you that this logical drive can't be deleted, because its write caching policy for maxCache is set on "Write-Back".

To solve the problem, click on the 1st icon in the "maxCache" block at the top of the page. 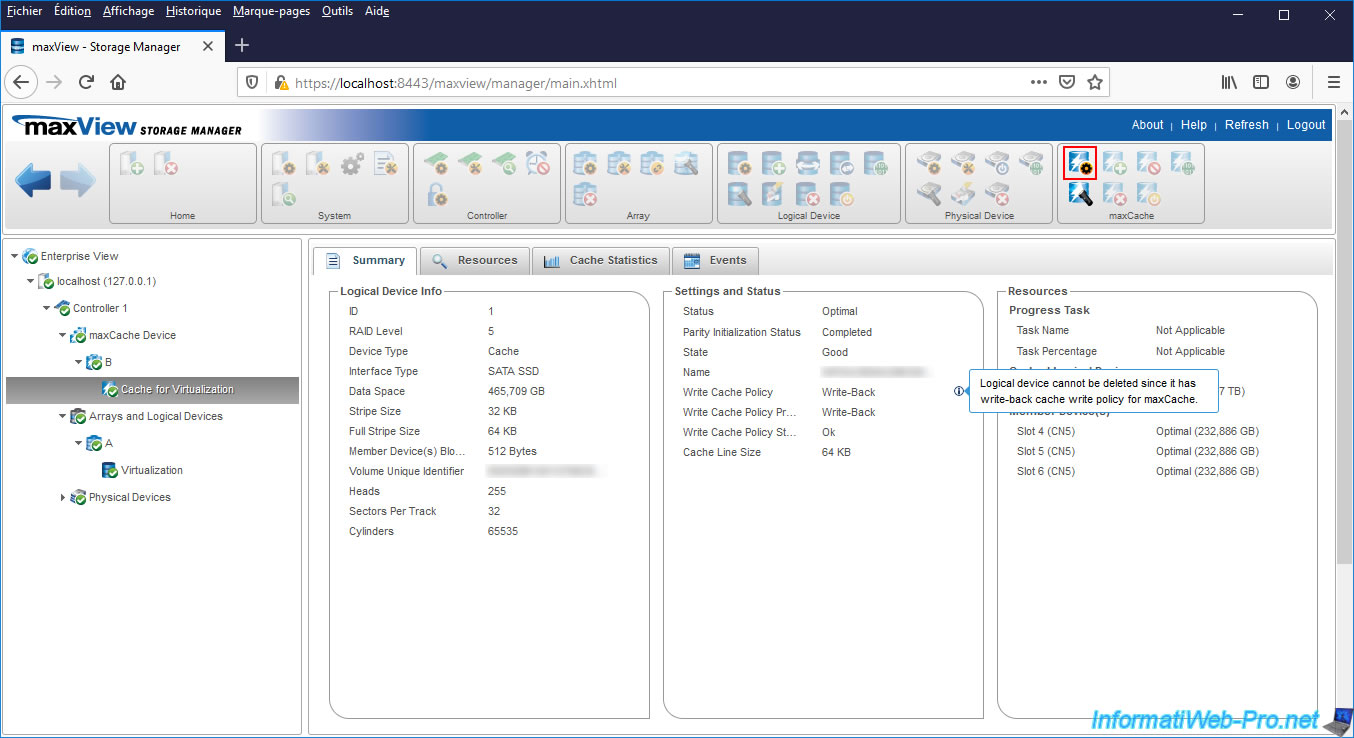 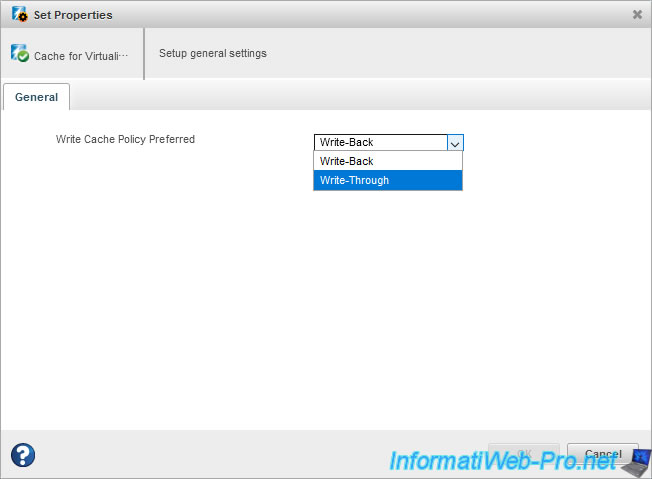 maxView tells you that the "Write-Through" write cache policy will degrade performance for this RAID level.
Ignore this warning and click OK. 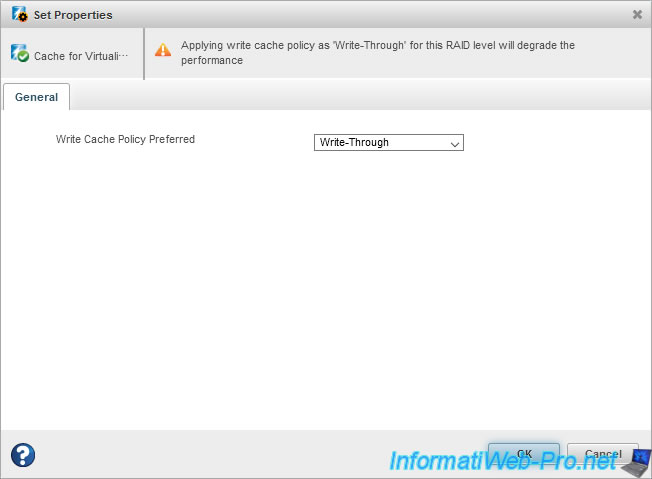 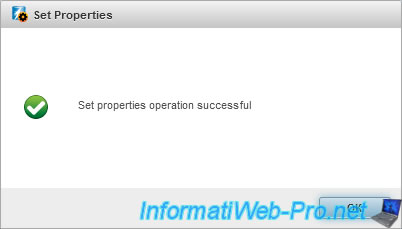 Wait while the "Working on it" message is displayed.

Then, you will see that the write cache policy has been changed and that you can now delete this logical cache drive if you wish.
Click on the icon with a white cross on a red background in the "maxCache" block. 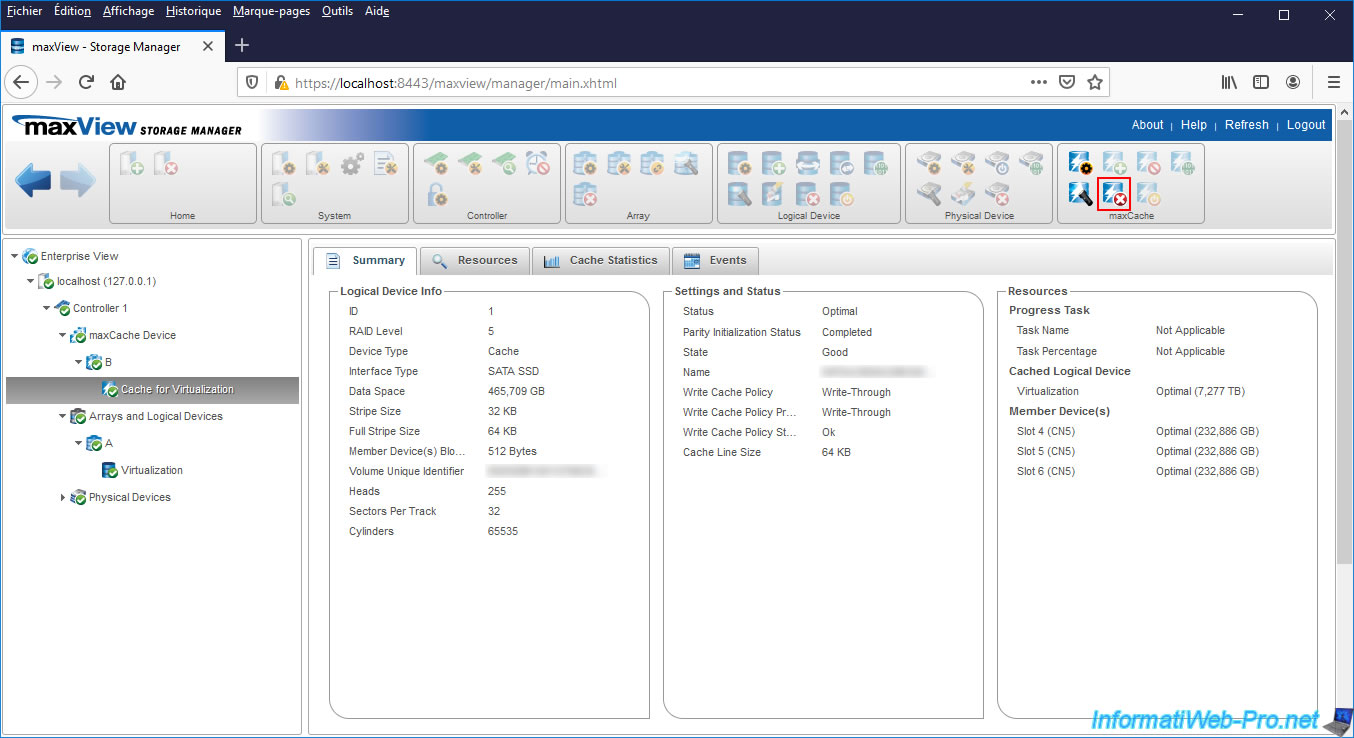 The "maxCache logical device will be deleted. The logical drive will no longer be accelerated by a maxCache" message will appear.
Click Delete to delete this logical cache drive. 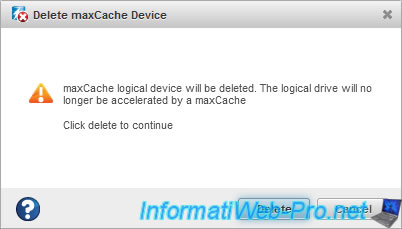 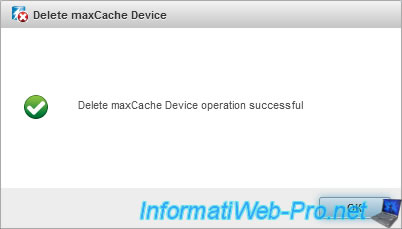 Note that deleting the single logical cache drive will also delete the maxCache array affected by it. 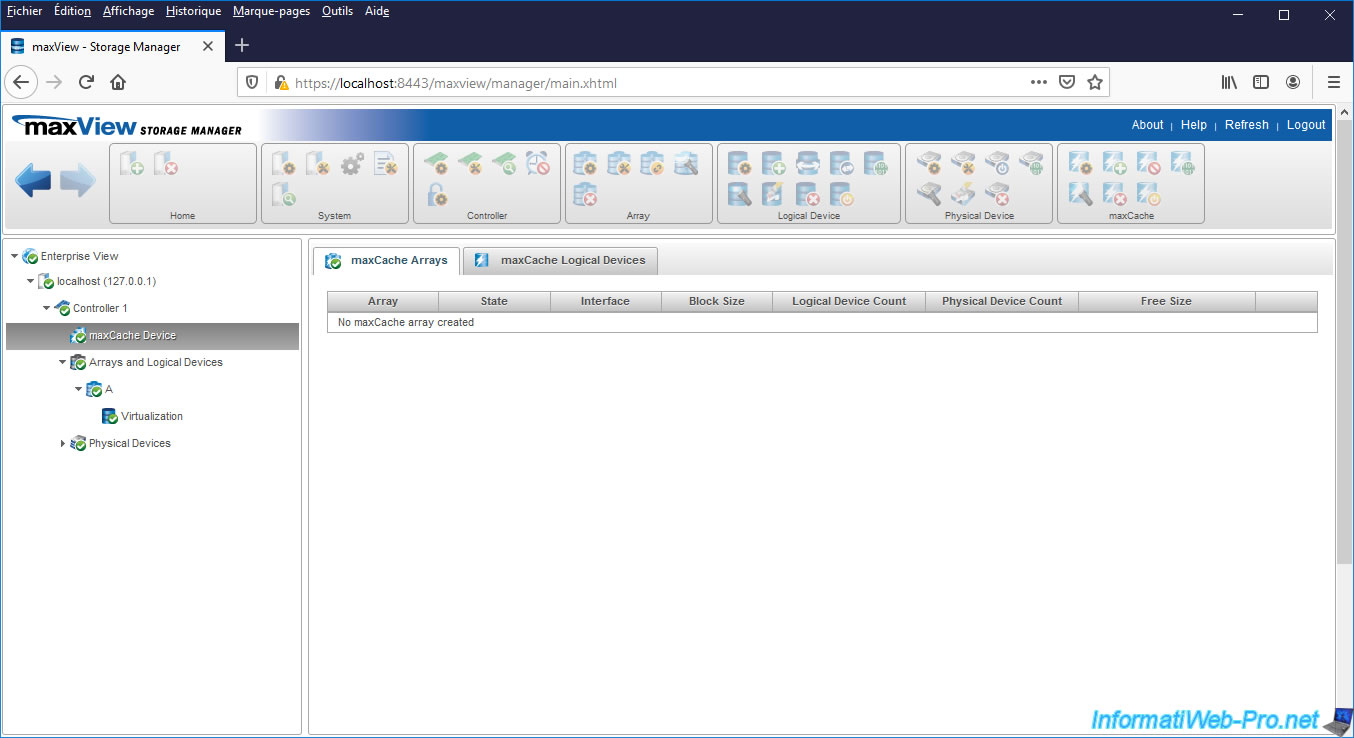 For the physical disks (in this case, our SSDs) concerned, you will see that they are now free (State : Ready). 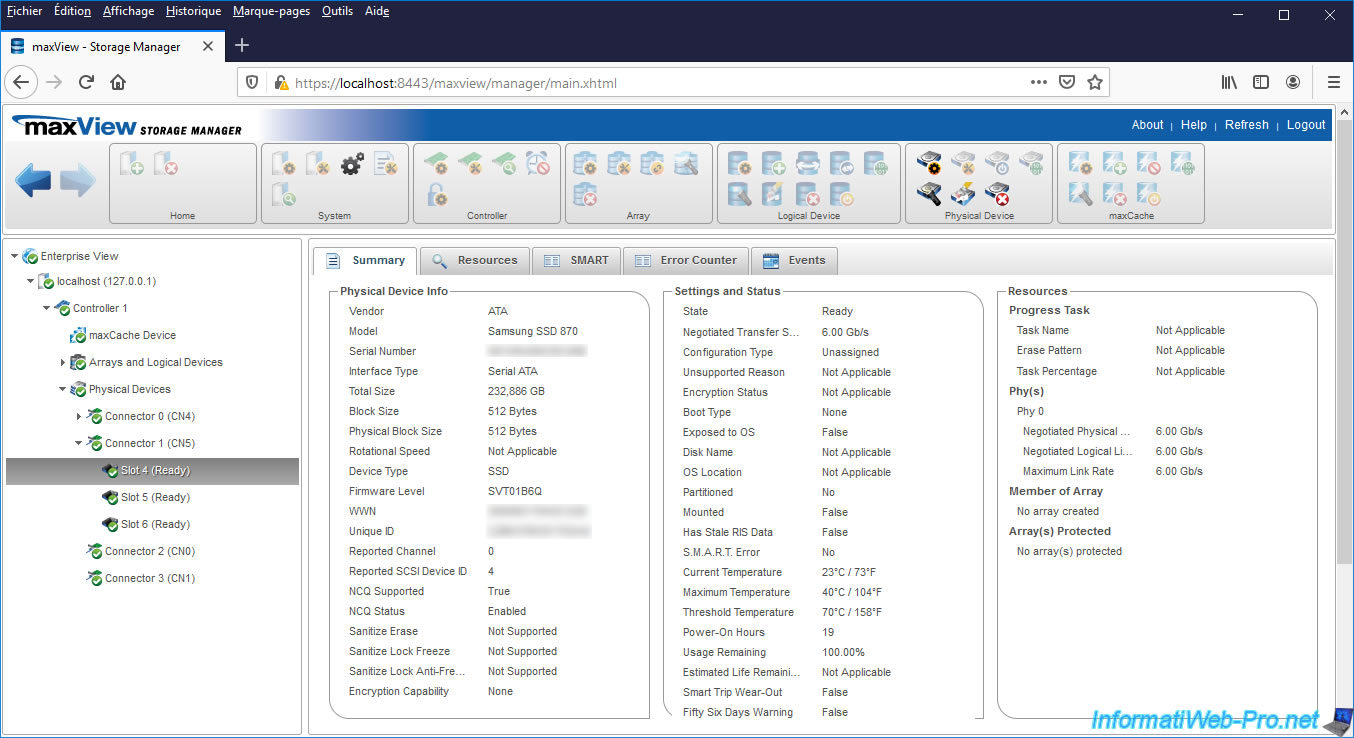