When you want to install VMware Tools on a Windows virtual machine or a Windows Server virtual server with GUI, installing VMware Tools is very easy.
Nevertheless, on Linux, this is often complicated because you will have to go through the command line.

Tutorial tested on Debian and Ubuntu 18.04.

If you look at the VMware site, you will see that VMware recommends installing the package available for most Linux distributions.
This makes installing your virtual machine drivers very easy.

Then, install the "open-vm-tools" package.

Note that installing the "open-vm-tools" package only will not allow you to benefit from all the features of the classic VMware Tools.
As stated in the official VMware documentation, you will also need to install the "open-vm-tools-desktop" package if you want to take advantage of these features :

Important : it's more and more common that these packages are already installed in Linux distributions.

With these 2 packages installed in seconds, you'll be able to use almost all the features offered by standard VMware Tools with one exception : VMware file sharing support (available in the virtual machine settings).

Update : since version 16 of VMware Workstation, the "VM -> Reinstall VMware Tools" option is grayed out after installing the "open-vm-tools" and "open-vm-tools-desktop" packages.
However, support for VMware shared folders is now supported by these Linux packages since this new version of VMware Workstation. So, installing VMware Tools in the Linux guest OS is no longer necessary in this case.

As stated on the VMware site, if you want to use this feature, you will need the vmhgfs driver which is not included by default in Linux distributions and in the "open-vm-tools" and "open-vm-tools-desktop" packages. 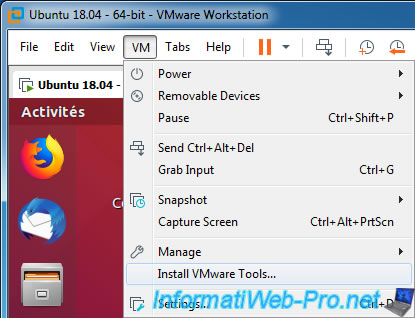 Then, open a terminal and type these commands.

Mount the virtual CD on the "/mnt/cdrom" mount point.

List the files of this virtual CD by typing this command :

Uncompress the file "VMwareTools-xx.x.x-xxxxxxx.tar.gz" in the temporary directory of your Linux distribution.

Go into the "vmware-tools-distrib" folder of the uncompressed file.

Start the installation of VMware Tools with the default options (thanks to the "-d" param).
This will save you from pressing Enter for the ten or so questions asked.

During the installation, you will see a message that tells you that VMware shared folders will now work.

And this will be displayed at the end :

Tutorial based on the official procedure provided by VMware : Installing VMware Tools in an Ubuntu Virtual Machine (1022525)