Because we use very often the virtualization, and especially Citrix technologies for our new "InformatiWeb Pro" website. It's time to buy a RAID controller to be able to virtualize the XenServer virtualization server, the XenDesktop controller and all clients and servers needed to implement this solution. In addition, the high availability, multiplies by 2 the number of some servers.

Anyway, now that you have an example of usage of a RAID controller, let's unpack the controller : Adaptec RAID 6405.

Note : This RAID controller is available in box version (kit version) and in single version (cable not included).

Important : PMC-Sierra who owned the Adaptec brand was acquired by Microsemi Corporation.
Links present on this article have therefore been updated accordingly.

To start, here is the box containing the RAID controller. 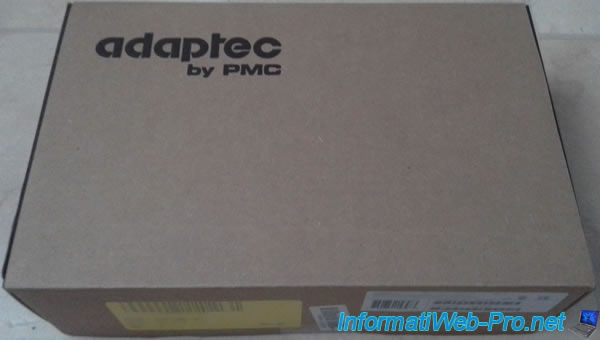 In this box, you will find : 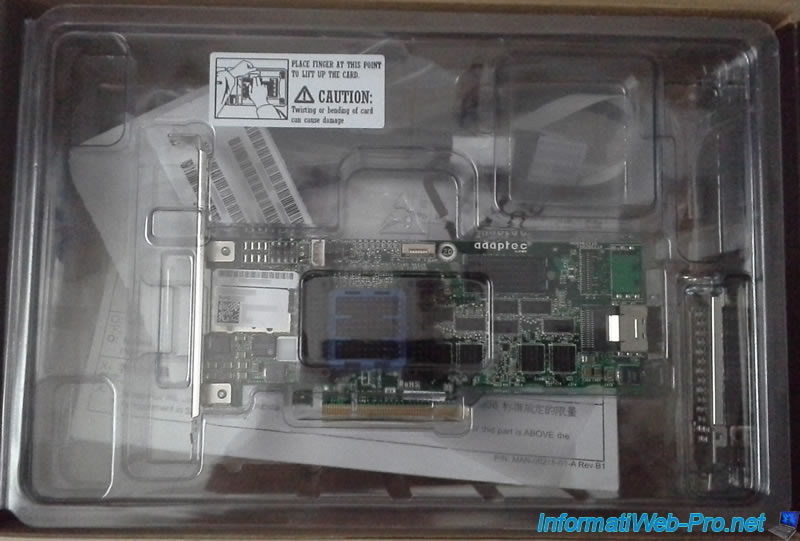 The Adaptec RAID 6405 controller is compatible with SATA and SAS hard drives thanks to the included cable.
Note : the screw to secure the RAID controller in the tower is not provided. This screw is supplied with the case of your computer. (screws for hard drives are identical to that required to secure the PCIe card) 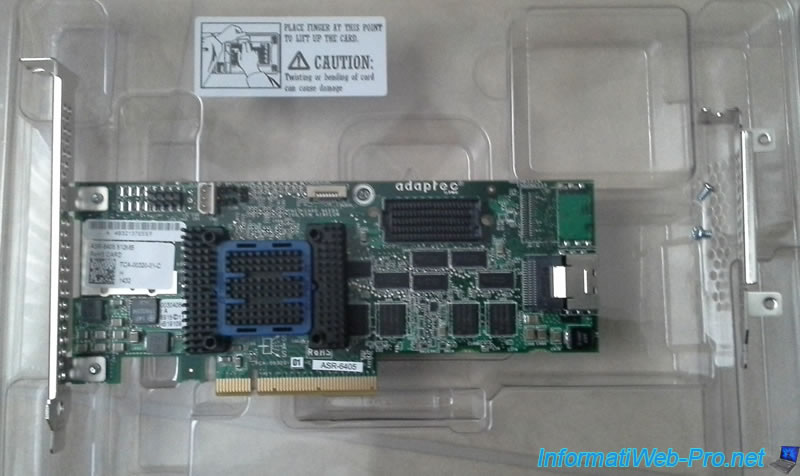 Note : There is no connector on the back of the card. 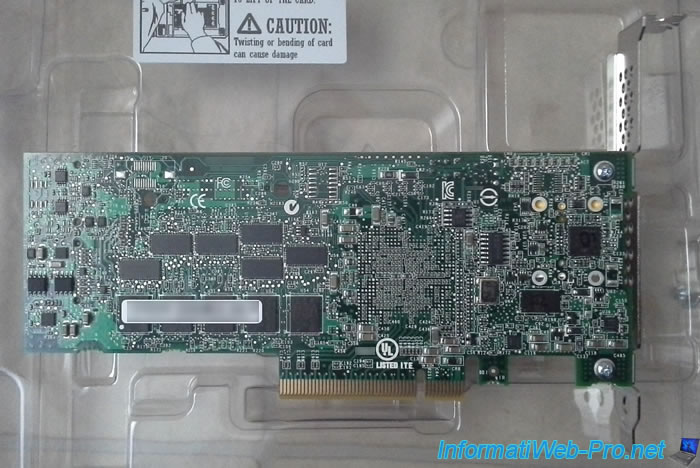 The adapter "Low-Profile" is only useful for servers and compact towers. 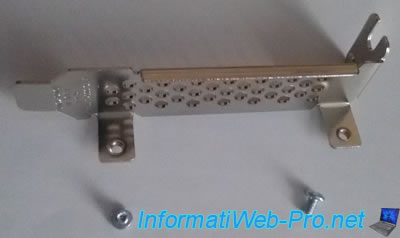 If you purchased the box version (or kit) of the RAID controller, you will find a "SFF-8087 to 4 S-ATA connectors with sideband" cable.

This cable has several connectors :

As you can see on the image below, the "Mini SAS (SFF-8087)" connector plugs into the silver connector on the right of the RAID controller.
Warning : As indicated in the QuickStart documentation that you find on the installation DVD, it's recommended to connect at least one SATA hard disk with this set of cables, before connecting this "Mini SAS (SFF-8087)" connector on the RAID controller. 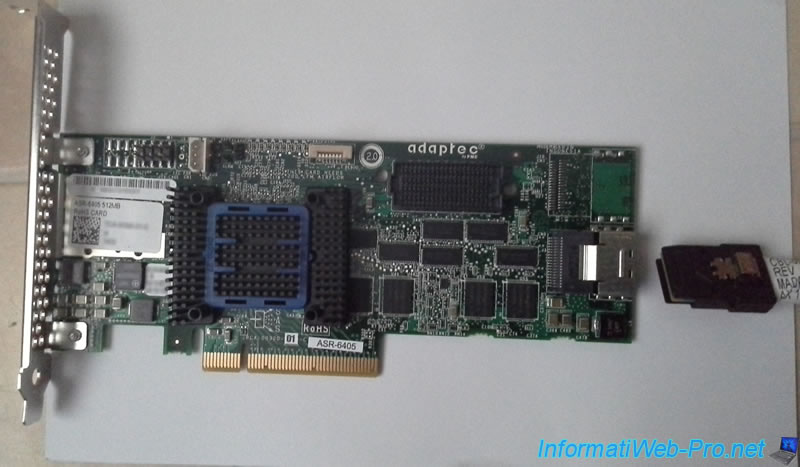 On the side of the box, you will find :

In the box, you will find stickers with a TSID that will serve you when you contact the Adaptec technical support. 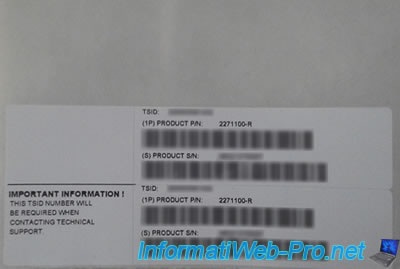 As indicated on this yellow sheet, if your product is defective, you must return it to the Adaptec technical support, and not to the place where you bought it. 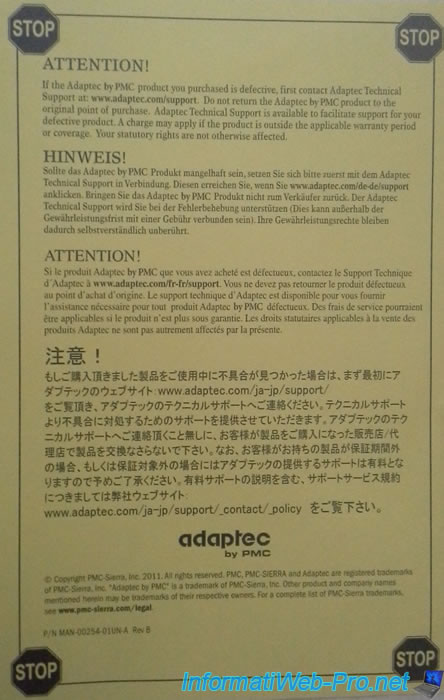 On the left side you will find :

As indicated on this sheet, the RAID controller warmers and your case must be well ventilated.
In our case, we have a Zalman Z11 Plus case that is bigger and has several fans + a Noctua CPU cooler. So, the heat is not a problem in our case. 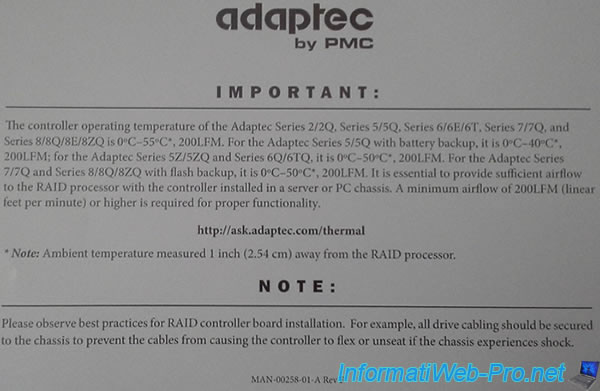 And finally, you will find the installation DVD containing : 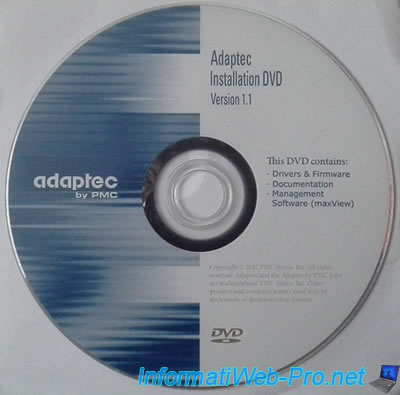 This controller is a real RAID controller because it has 512MB of dedicated cache memory. Unlike RAID controllers integrated into new motherboards, which are hybrids RAID or pseudo hardware, since they use the processor and RAM present on your motherboard.

Because this true RAID controller has its own processor and its own dedicated RAM :

2.2. Support of the indicator lights through SES2/SGPIO technology

Generally, RAID controllers are used in servers with SCSI or SAS hard drives.
In datacenters, hard drives are placed in racks to use the hotswap technology (ie : disconnecting or reconnecting a hard drive without powering down the server). Some "high end" motherboards also allow you to use the hotswap technology like our motherboard "ASUS Z97-PRO WI-FI AC".
As you can see on the picture below, 2 LEDs are present next to hard drives. To blink these LED, you need to connect the 8-pin cable to indicate the use of the hard drive through SES2 / SGPIO technology. 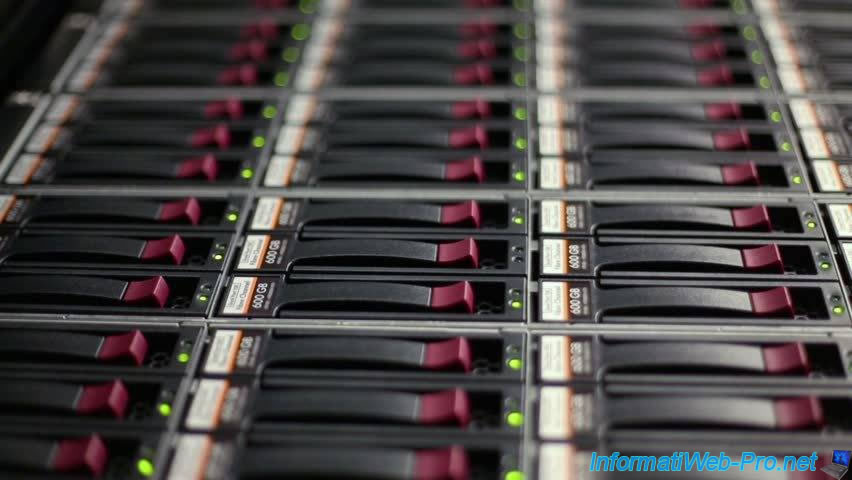 Finally, note that this RAID controller uses the "Intelligent Power Management" technology that reduce up to 70% the power consumption of the controller.

Quote of the Adaptec website :
With Intelligent Power Management, users can minimize power consumption by alternating between 3 modes :

Among the types of RAID, you will find :

2.5. A web interface to manage your RAID controllers and volumes

This RAID controller comes with a program called "MaxView Adaptec Storage Manager".
Note : The program provided on the installation DVD is in 1.0 version. After installing it on a computer running Windows 7 64 Bit, we realized that the web interface was inaccessible due to SSL errors.
To solve this problem, just download the latest version from Adaptec's site and install it. Then, you can ignore the security exception displayed by your favorite web browser.

Here are some previews of this program : 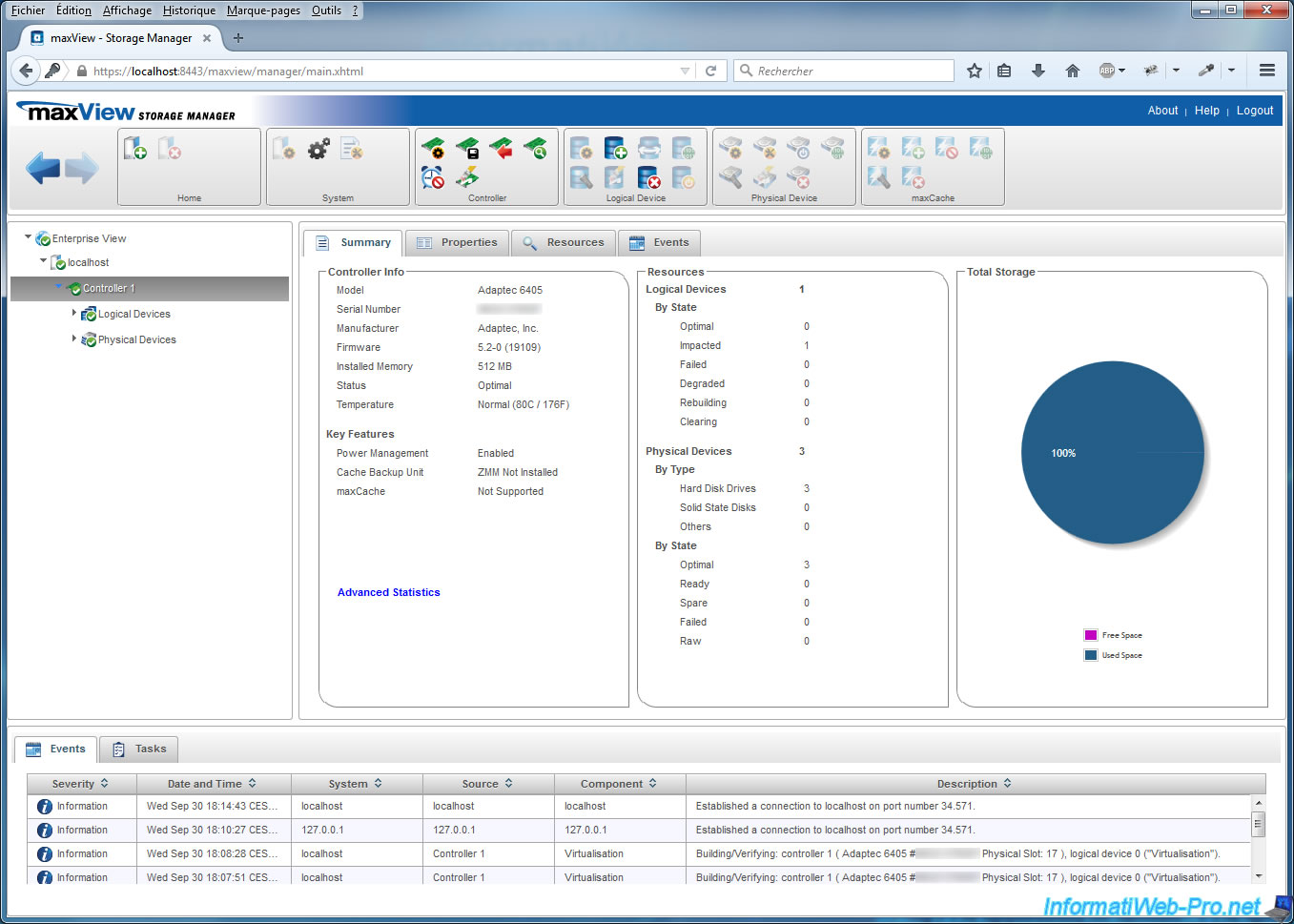 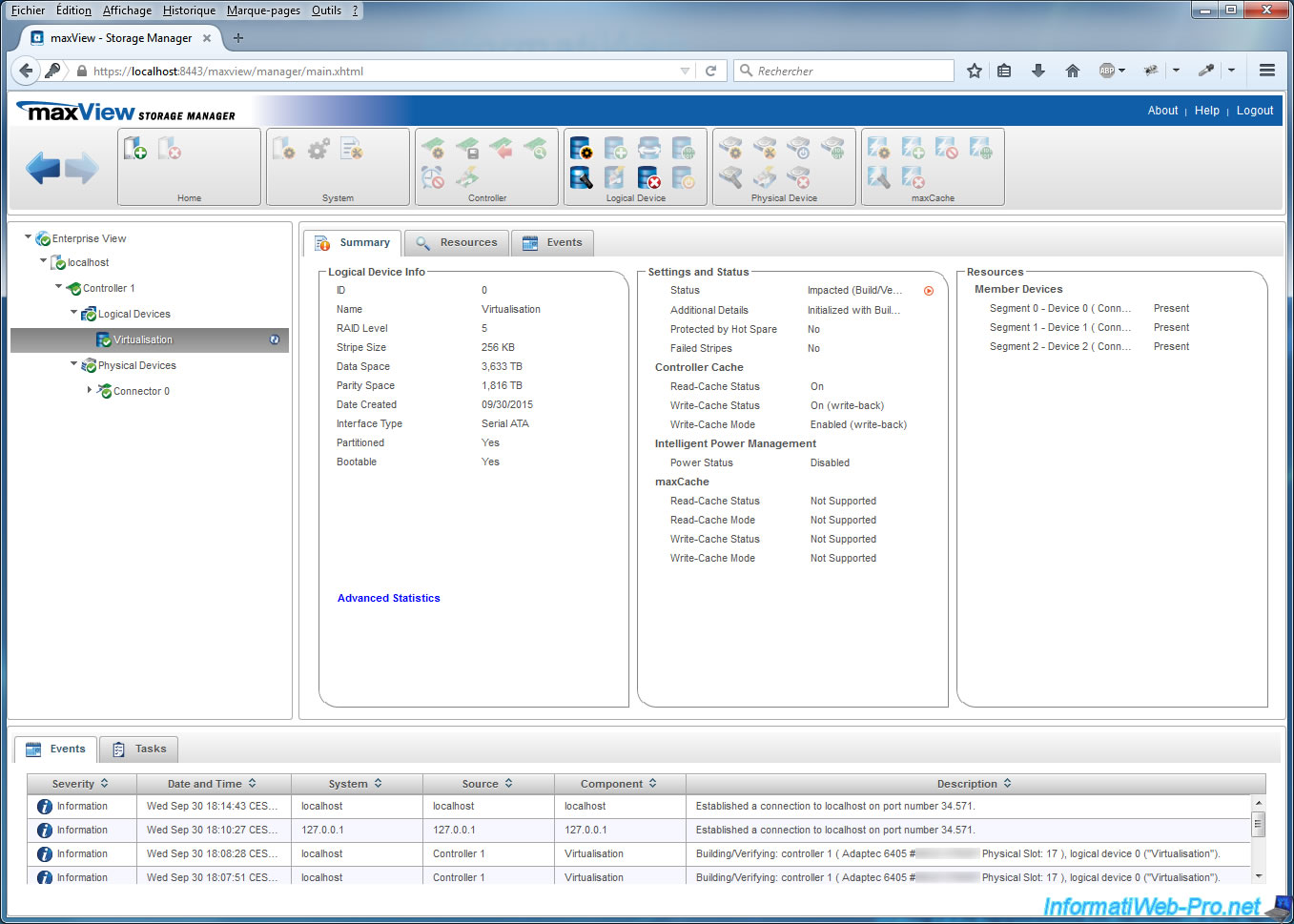 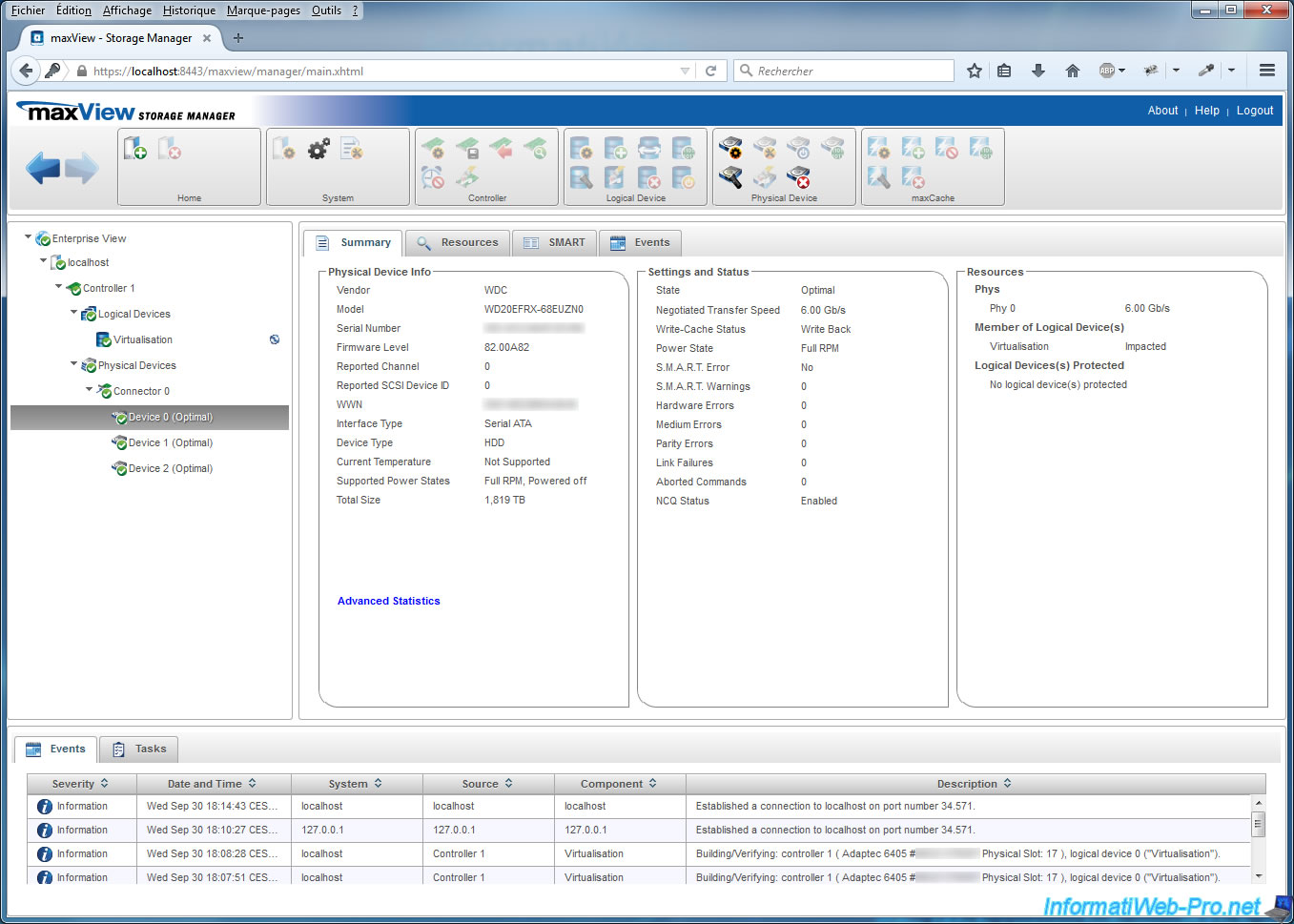 Before buying a RAID controller, here are some advices :