If you've never touched the network configuration of a VMware ESXi hypervisor before, you've come to the right place.
Indeed, in this tutorial, you will learn the basics of network management on VMware ESXi and you will thus know how virtual machines can access the physical network via, in particular, virtual switches created on your VMware ESXi hypervisor.

If you look in "Networking -> Port groups" of VMware ESXi, you will see that there are 2 port groups by default :

Note that you can create up to 512 port groups per vSwitch. Which is more than enough.
Additionally, you can force a portgroup to use a specific VLAN ID to isolate network traffic from 2 portgroups that would be on the same vSwitch. 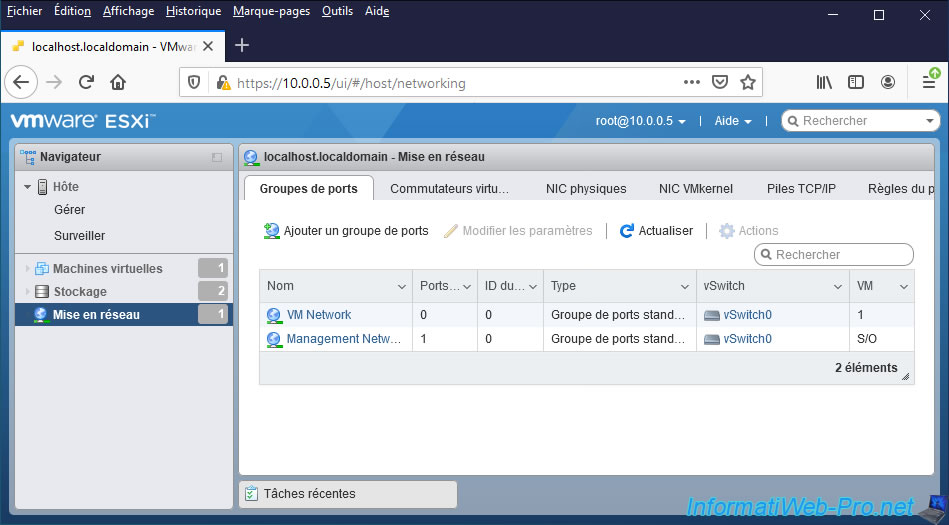 In the "Virtual switches" tab, you will find a "vSwitch Standard" type virtual switch named "vSwitch0".
This virtual switch acts as an intermediary between the physical network adapters (NICs) and the port groups.

Note that it's not possible to directly connect your virtual machines on a virtual switch created on VMware ESXi, but only on a port groups.
Hence the presence of a "VM Network" port group created by default when installing your VMware ESXi hypervisor. 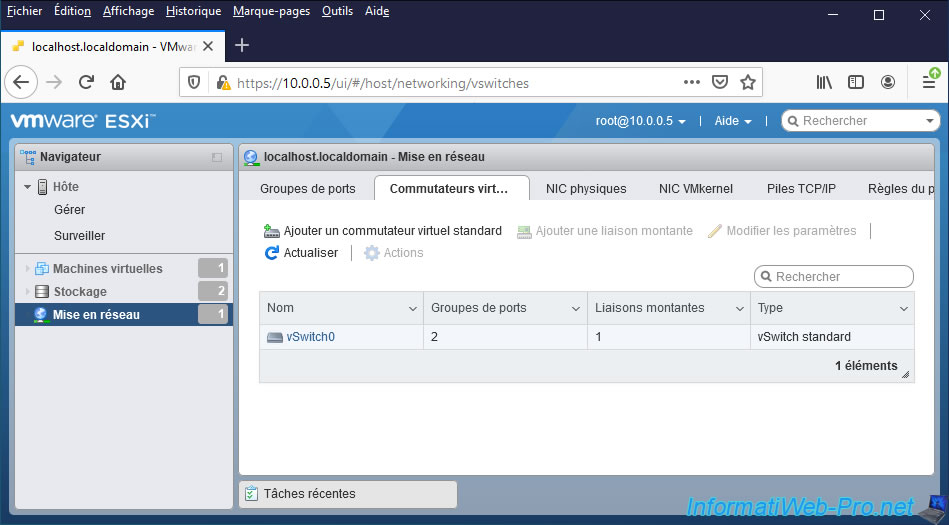 In our case, we have an "ASUS WS X299 SAGE/10G" motherboard with 2 "10 Gb/s" Ethernet ports.
VMware ESXi therefore displays 2 "physical network adapters" since each physical network port has a different MAC address.

If you are a little observant, you will see that there is only one network cable plugged into the "vmnic0" network card. Since the link speed is only displayed for this one and not for the "vmnic1" network adapter. 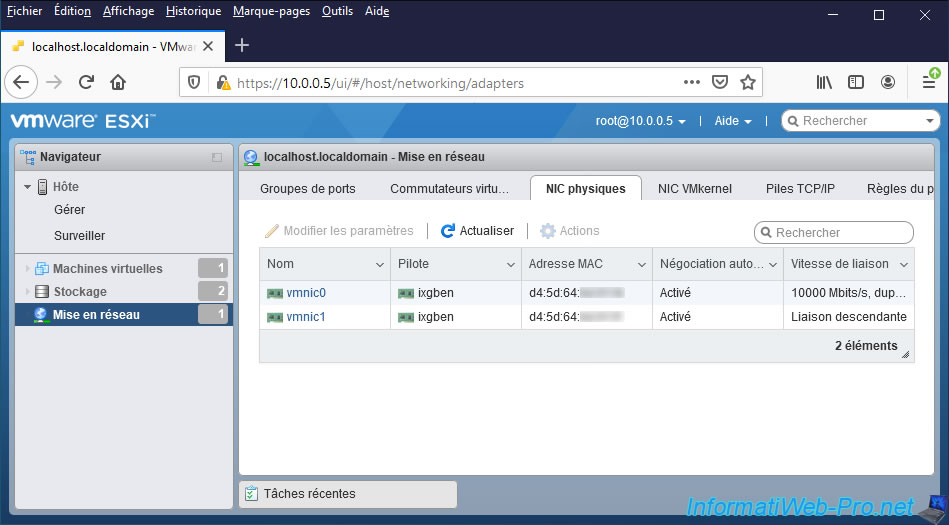 To make these notions of port groups, virtual switches and physical network adapters a little clearer, here is a diagram present in the official VMware documentation.

In the diagram below, you can see that : 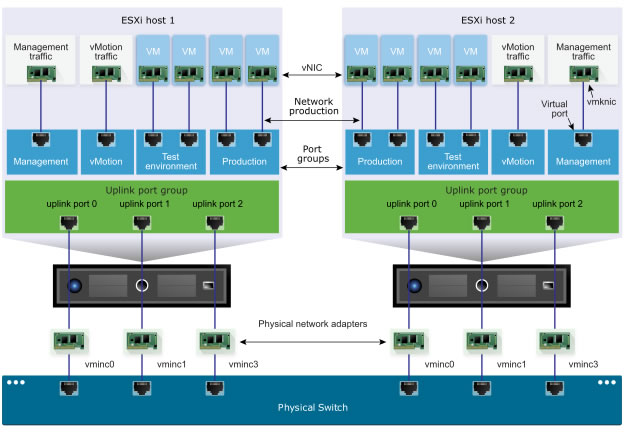 In the case of VMware ESXi, you have no choice since you will only have access to the vSphere Standard Switch (VSS).
However, if you switch one day to the paid version of this product, namely the "VMware vSphere" solution, you can also create vSphere Distributed Switch (VDS). 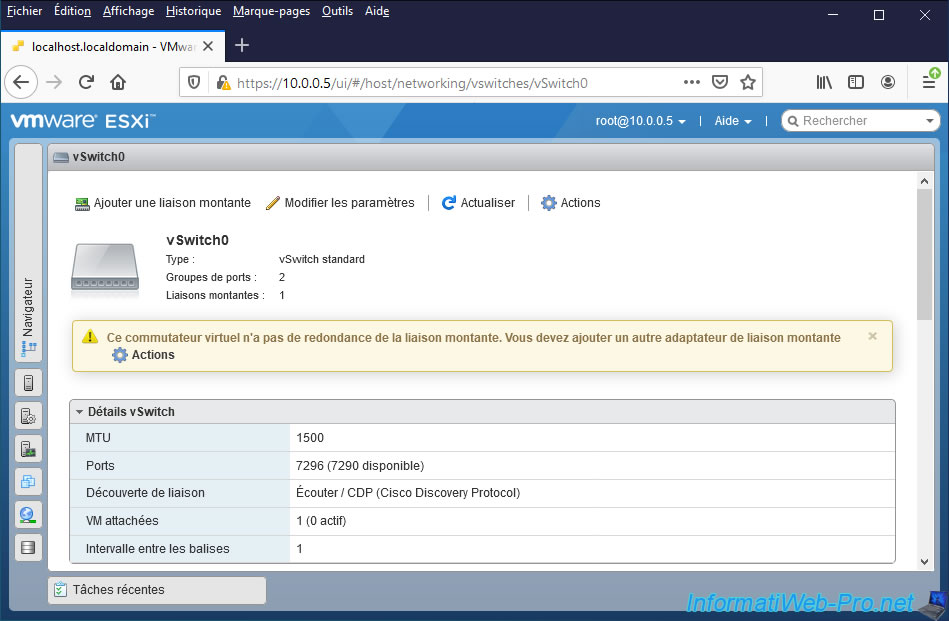 If you look at the bottom of this "vSwitch0" page, you will find a "vSwitch topology" section. 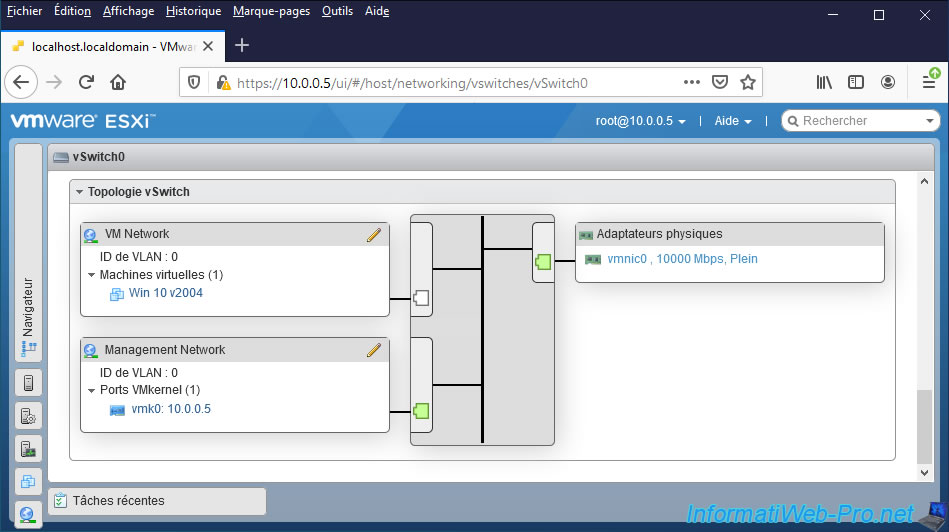 When you create a port group (or edit an existing one), you will see that some of the settings are the same as for the switches.
In fact, the value of these common settings are inherited by default from the virtual switch (vSwitch) on which the port group concerned is located.

To see it, click for example on "VM Network". 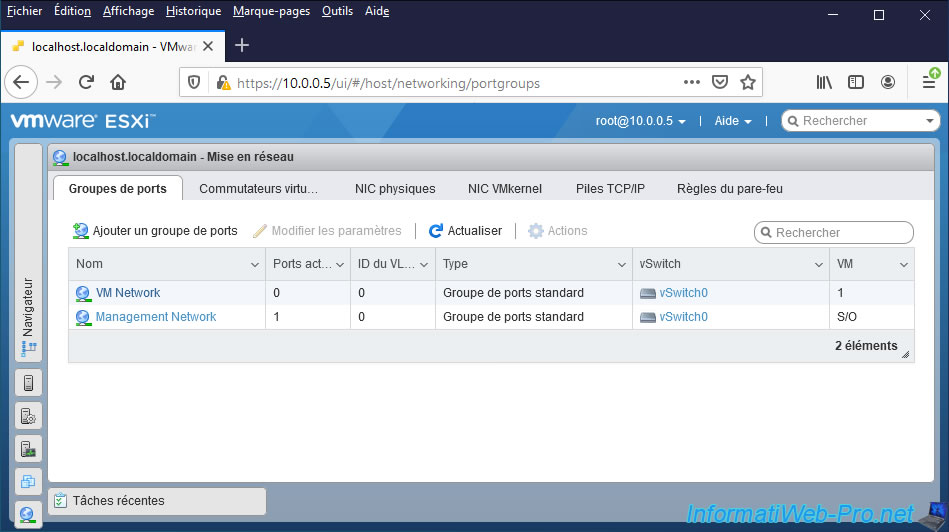 Note that you can easily see some information thanks to the "vSwitch topology" diagram : 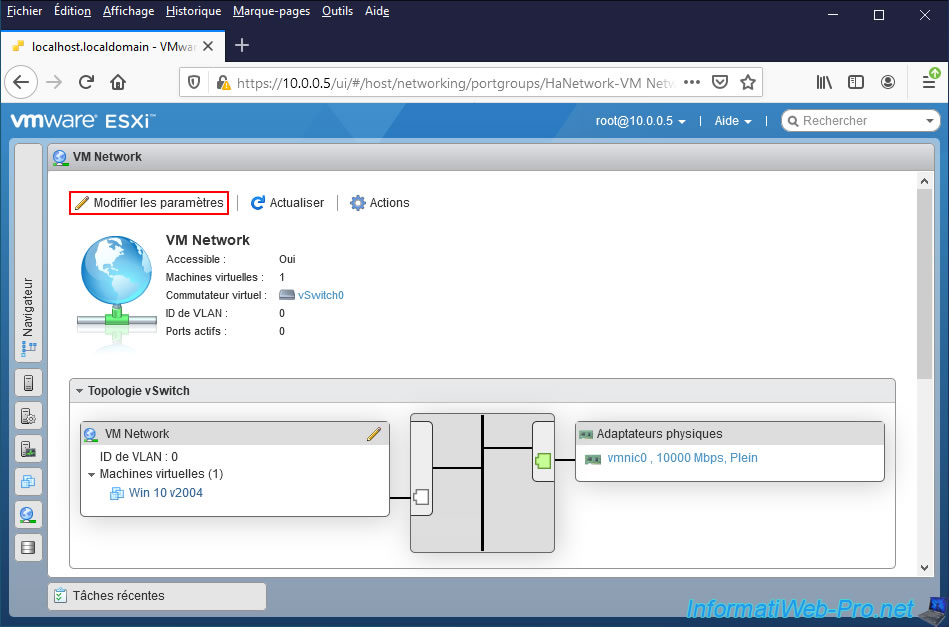 As you can see there are different settings offered, but their values are usually inherited from vSwitch. 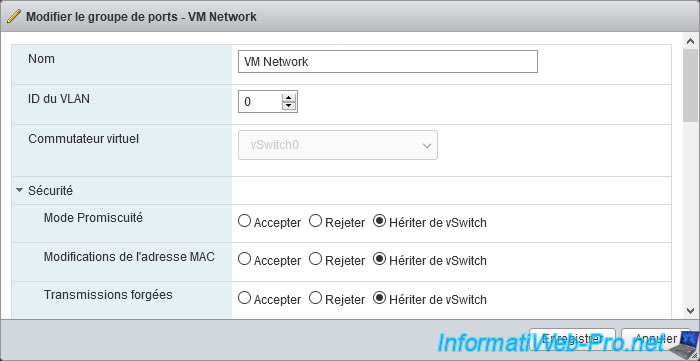 If you try to edit the vSwitch concerned by this ports group, you will find these common settings, as well as their real values. 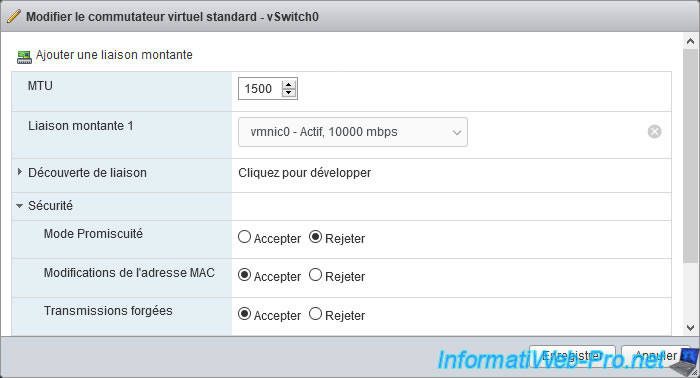 As noted earlier, by default, VMware ESXi tells you that your virtual switch doesn't have uplink redundancy when it uses only one physical NIC. 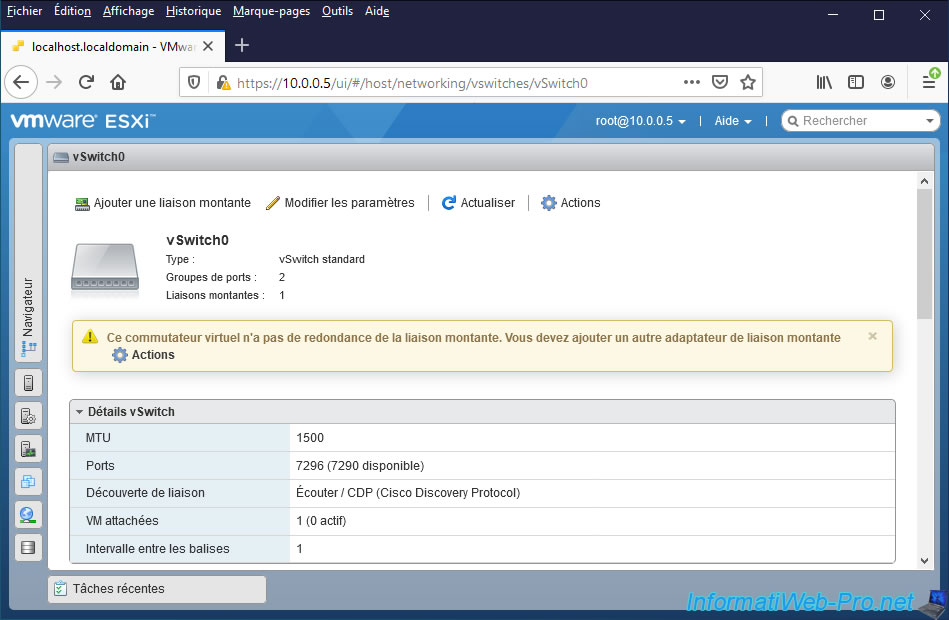 Add a physical network adapter in your server, then click on "Actions -> Add uplink" or directly on "Add uplink". 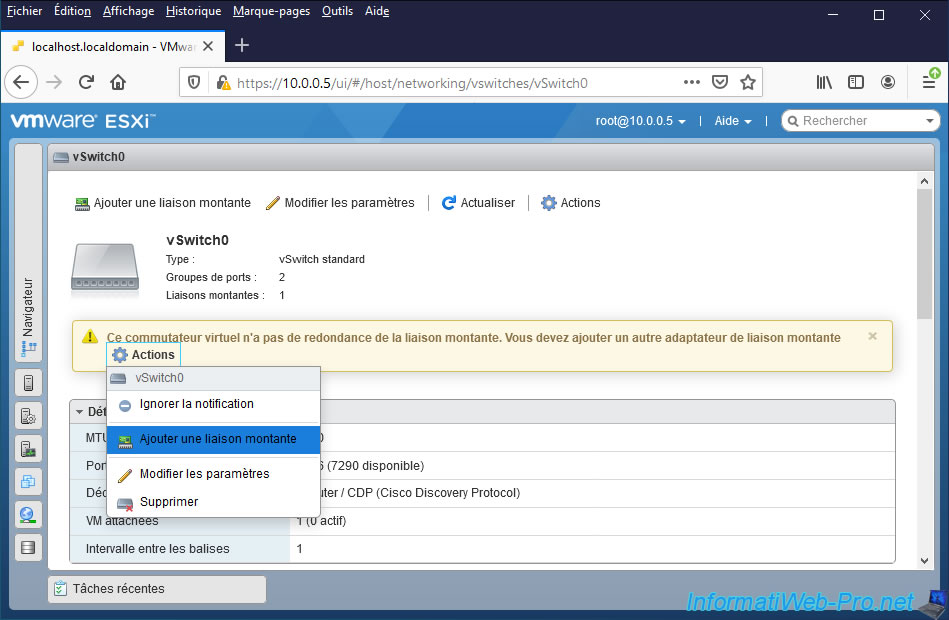 The new physical network adapter physically added to your server should appear in the "Uplink 2" list since it's not yet in use by a virtual switch. 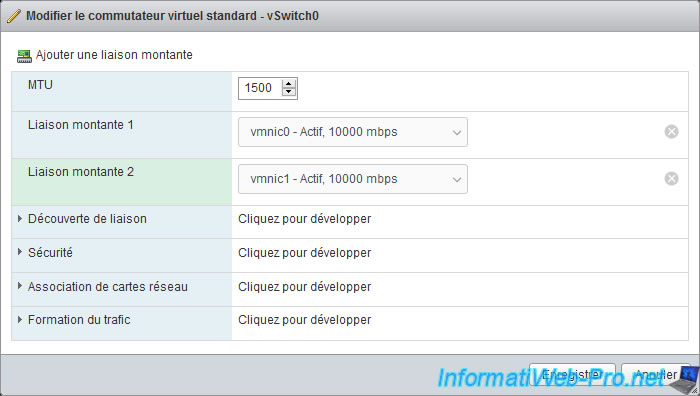 In the settings of this standard virtual switch (vSwitch0), you will find a "NIC teaming" section with different settings : 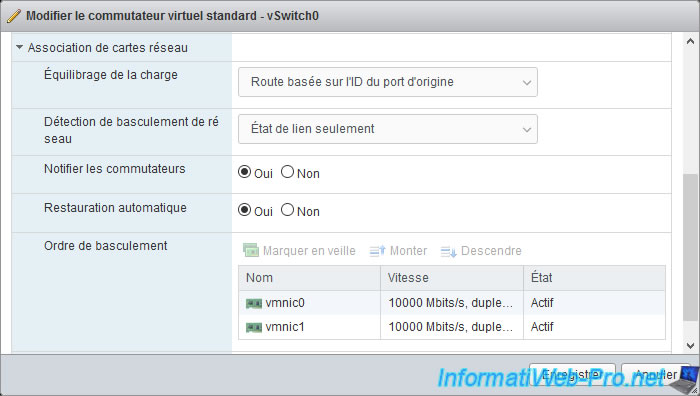 For the load balancing method, you have 4 options to choose from :

For more information on the operation, advantages and disadvantages of each of these methods, refer to the "Load Balancing Algorithms Available for Virtual Switches" page of the official VMware documentation. 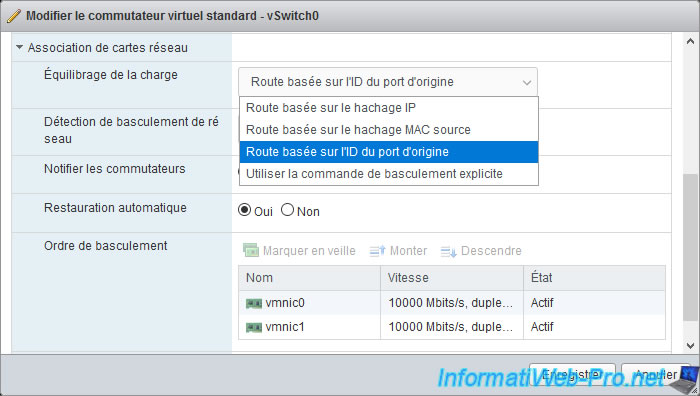 For the "Network failover detection" setting, which concerns the detection of network failures, you will have the choice between : 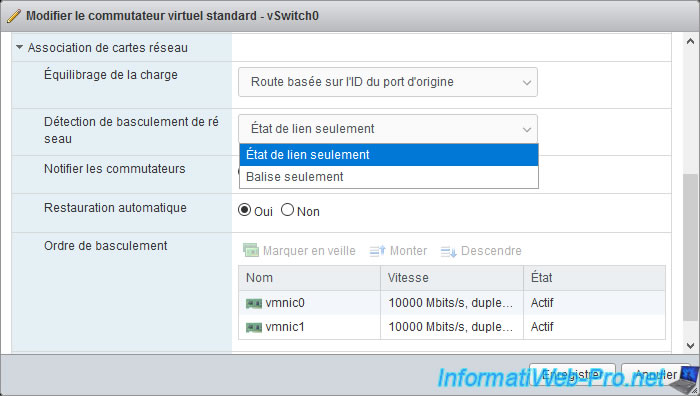 For the failover order, this allows you to choose the order in which the physical network adapters assigned to this virtual switch (vSwitch) should be used. 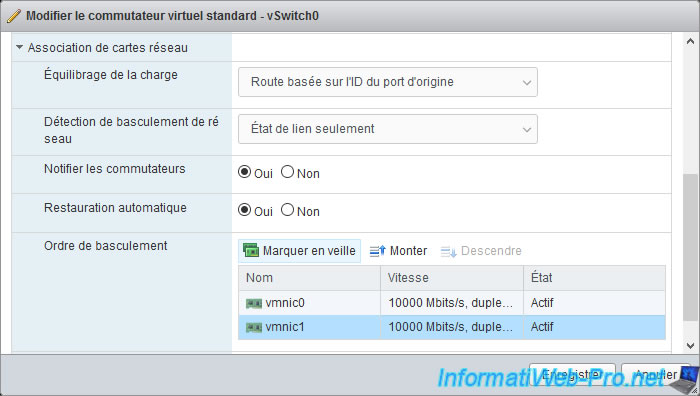 As expected, the status of the selected physical network adapter becomes : Standby. 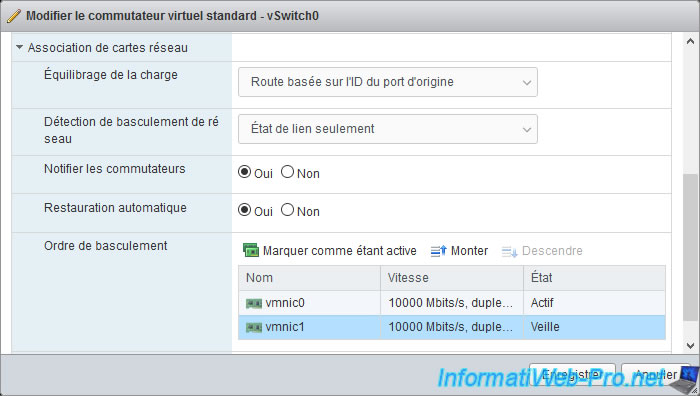 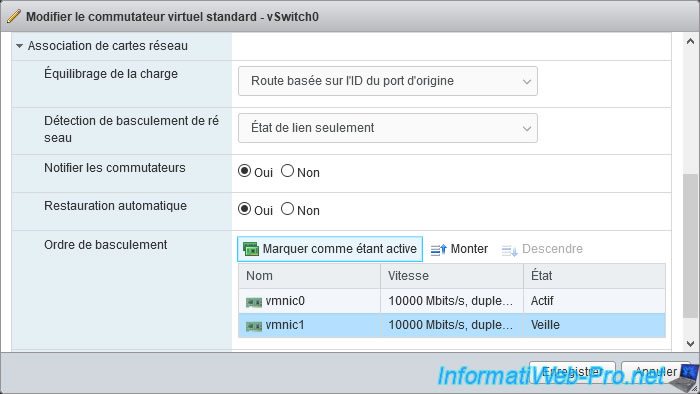 The selected network adapter is once again in the "Active" state.
Finally, click on : Save. 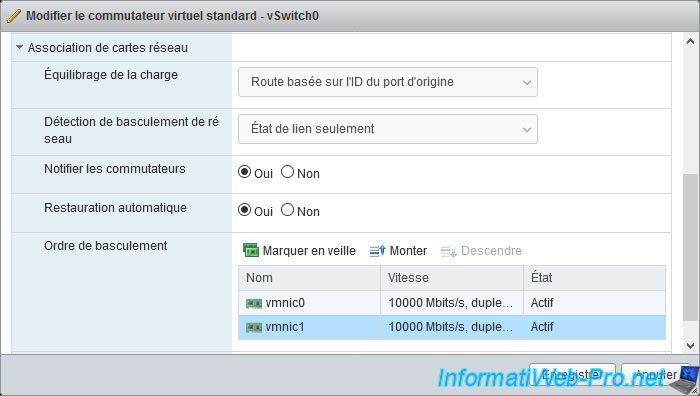 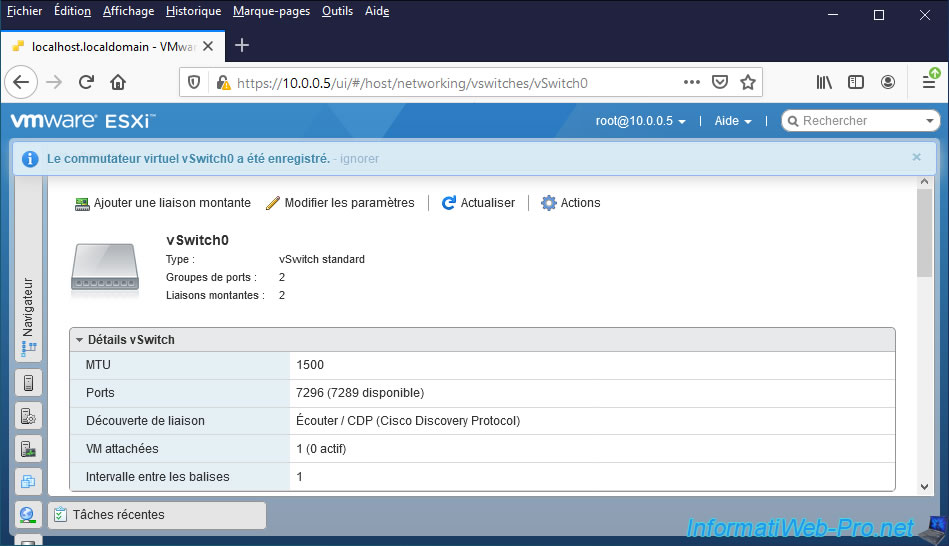 If you look at the topology of this virtual switch (vSwitch0) at the bottom of the page, you will see that it now uses 2 physical network adapters. 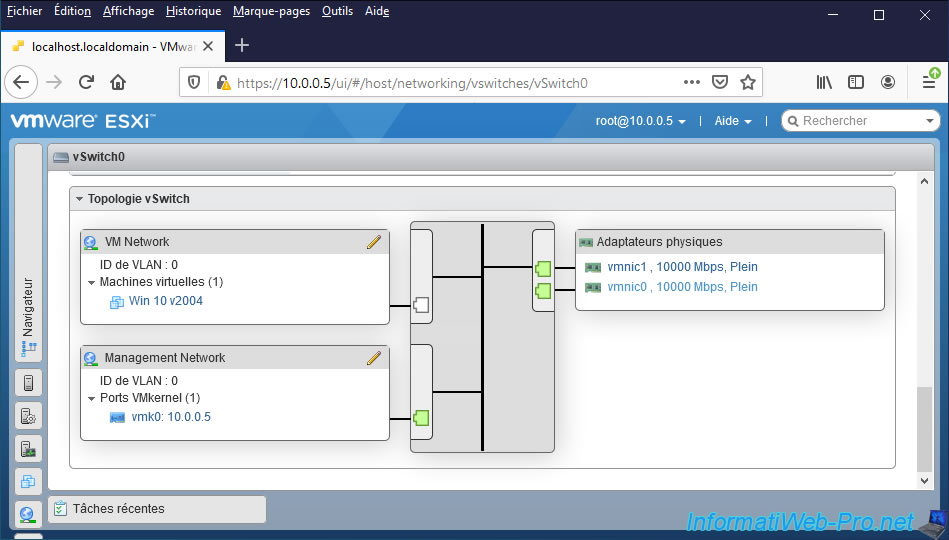